United Airlines hasn’t served complimentary meals in economy for years, but passengers on Flight 310 from Chicago to Los Angeles on Wednesday were treated to a choice of a Thai summer salad with mango and rice noodles, a quinoa and kale superfood wrap or an artisanal cheese plate.

No, the Chicago-based airline isn’t bringing back free food.

United served the meals instead of its typical free pretzel mix and snacks for sale to highlight what it says are industry-leading initiatives to help the environment. The airline previously set a goal of reducing its emissions by more than 50% by 2050.

The meals were served on compostable or recyclable plates; hot beverages were served in recyclable paper cups, an industry first, according to the airline. The cutlery was compostable. In first class, passengers’ meals were covered with a beeswax wrap instead of the usual plastic and there was no plastic ring around the napkin.

The goal: zero cabin waste instead of the average 65 pounds of garbage taken off a United flight. (They got it down to 14 pounds, all of it passenger garbage.)

A reduction in cabin waste was one of four major steps the airline took on the one-time flight it dubbed the “Flight for the Planet.” The airline said it was the first carrier to take all of the actions on a single flight, declaring it “the most eco-friendly commercial flight of its kind in the history of aviation.” 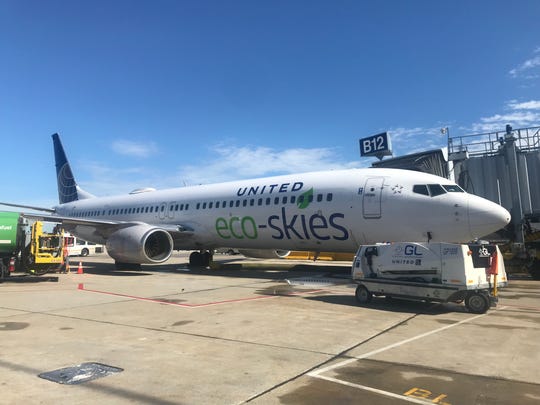 United used a Boeing 737-900 painted with its eco-skies livery for its "Flight for the Planet'' from Chicago to Los Angeles on June 5, 2019. (Photo: Dawn Gilbertson, USA TODAY)

“It showcases our industry-leading commitment to becoming the most environmentally conscious airline in the world,” United president Scott Kirby said before the flight took off from O’Hare airport.

He called it a personal priority.

“Sustainability and our environment is something I’ve cared about for many years, going back to my days in college,” he said. 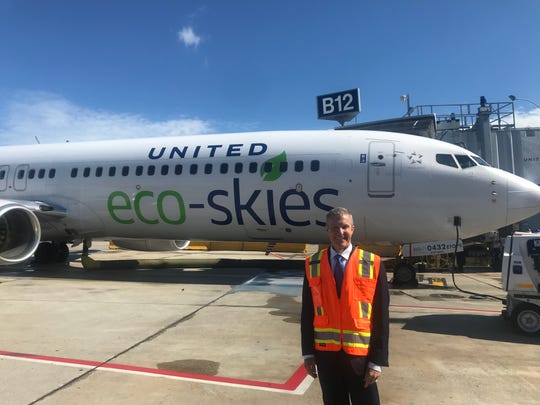 The other environmentally friendly steps United took on Wednesday’s flight: 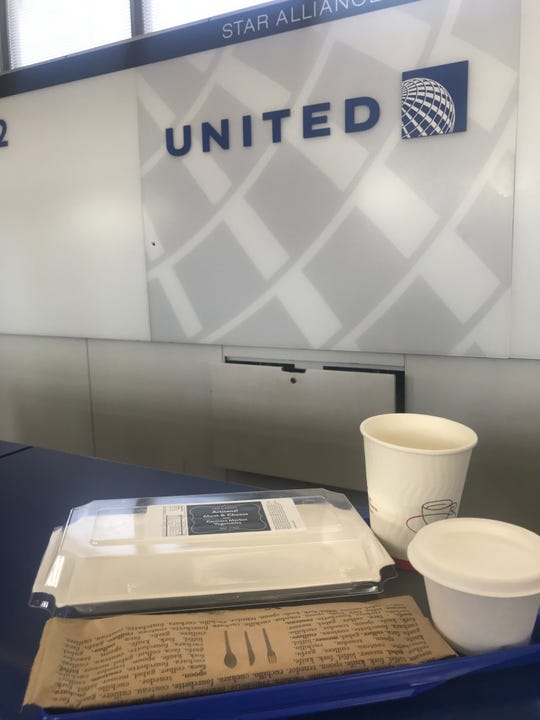 Flying is bad for the environment. Here’s what you can do

Passenger reaction to United’s “Flight of the Planet” was mixed in the gate area at O’Hare.

Annika Bjorklund, 17, was fascinated. She just graduated from high school, and one of her favorite classes her senior year was environmental science. She and her father, Steve, were on Flight 310 but didn’t know the special events were planned.

“I think it’s a really cool thing,” she said.

Steve Bjorklund praised the airline’s sustainability efforts but said they wouldn’t dictate his choice of airline.

The coffee cups on United's "Flight for the Planet" were recyclable and the napkins were made of bamboo. (Photo: Ryan Hood, United Airlines)

Joanne DeTrana watched the festivities somewhat skeptically from the B11 gate area while she waited for her flight to Tampa, Florida, for a friend’s 50th wedding anniversary.

“I believe in sustainability but I think sometimes you can carry it to the Nth degree,” she said. “To me, that’s not a big marketing sell.”

DeTrana said it wouldn’t factor into her ticket buying decisions.  Price and comfort top that list, she said.