After 529 days of closure, “it’s a very emotional day. We wanted to spread positivity,” Alessandro Zamperla, the president of the company that owns Luna Park — home of the Cyclone — said at an opening ceremony.

“It’s been very tough, but now is really a day of celebration, a day where we get together and we want to inspire people to come here, to really be able to have fun,” said Zamperla, whose company is called Central Amusement International Inc. It has six new attractions for youngsters coming online this year, according to its website.

The attractions will be open on weekends at first, with reduced capacity and other pandemic precautions.

Frontline workers got the first rides on the Wonder Wheel, which turned 100 last year. It was closed for the centennial, but Dennis Vourderis, a member of the family that owns Deno’s Wonder Wheel Amusement Park, was only looking forward.

“It’s a great honor for us to be able to bring some joy into the life of many New Yorkers … to be able to come in, have fun, smile again, which they haven’t done in a while,” Vourderis said at the opening ceremony, where federal, state and city officials enthused about rides, hot dogs and summer fun. 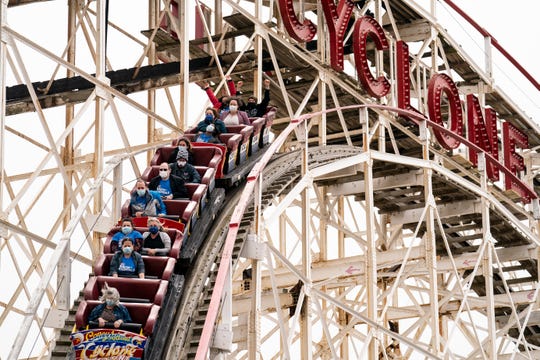 U.S. Senate Majority Leader — and Brooklyn native — Chuck Schumer recalled riding his bike to the boardwalk as a boy. Lt. Gov. Kathy Hochul said she’d have happily gotten up at 3:40 a.m. to make it to the reopening. City Parks Commissioner Mitchell Silver said he planned to ride the Cyclone for the first time since his teenage years.

Mayor Bill de Blasio called the reopening “one of the best days of the year.”

“Coney Island comes back, the rides come back and now New York City will come back. You can feel it,” the mayor said before taking a spin on the Cyclone himself. 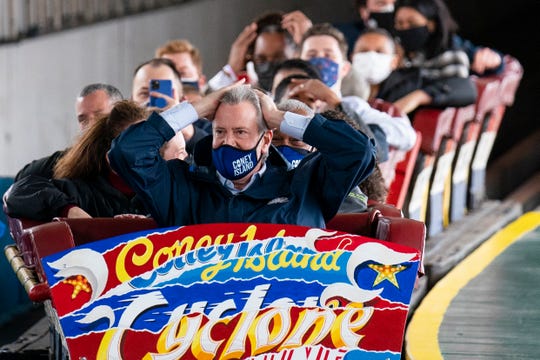