CRUISING can conjure up images of bingo, karaoke and the fine art of napkin folding.

Not so with the Celebrity Edge, Celebrity Cruises’ new £1billion liner which is creating waves and tearing up the rule book when it comes to floating holidays. 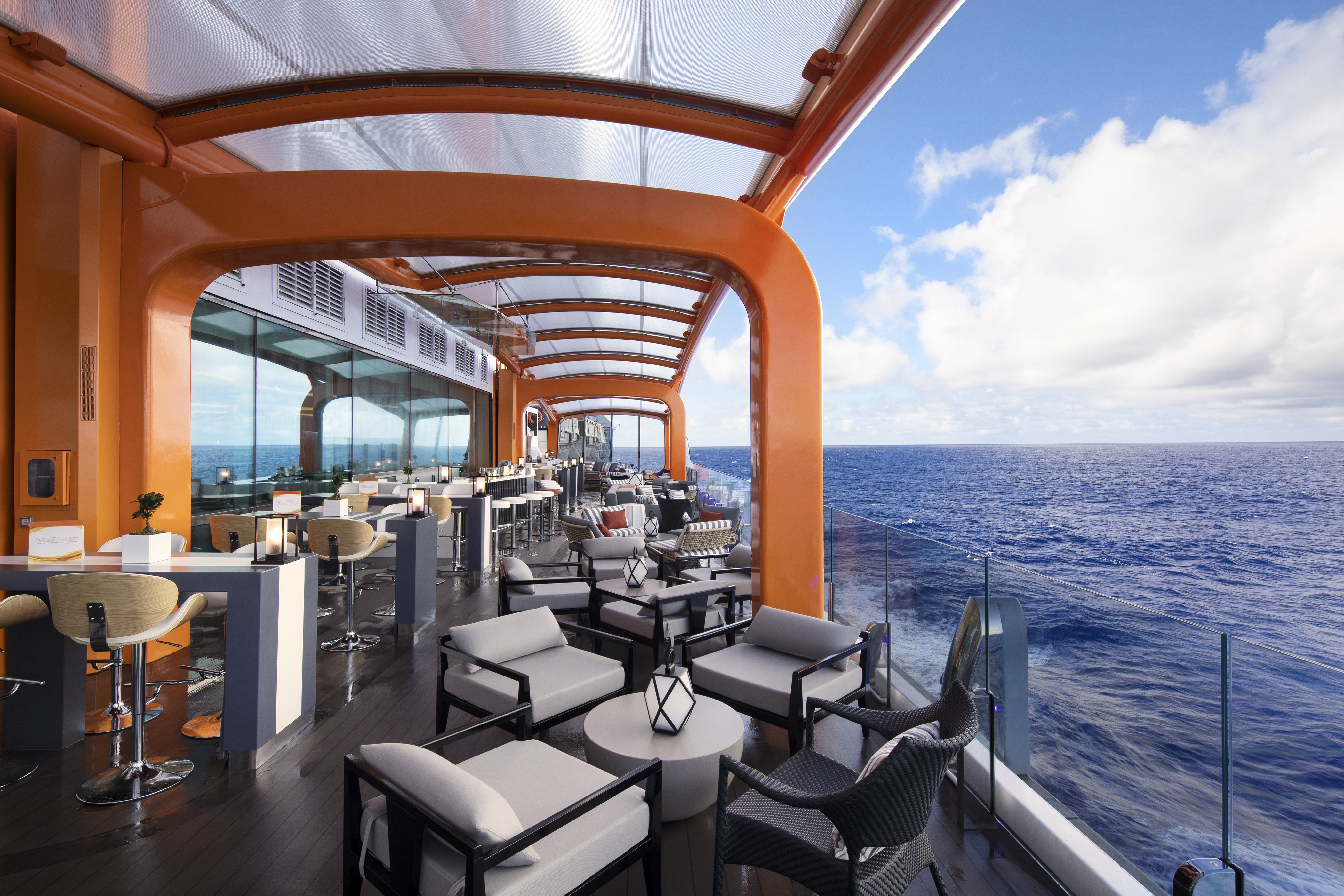 You just have to look at the ship’s official godmother — ­education activist Malala Yousafzai — to see there’s nothing ­textbook about this cruise. Traditional napkin folding has been replaced by the ancient ­Japanese art of origami.

Two fat ladies — or bingo — have now become two much fitter ladies, with a state-of-the-art laser maze game. Think Mission: ­Impossible — great for a bit of onboard cardio.

And its answer to boozy karaoke is world-class entertainment from America’s Got Talent superstar Marcus Terell in the ship’s 900- capacity theatre — sparing me the drunken renditions of Livin’ La Vida Loca from fellow passengers.

It’s true that Celebrity Edge’s version of cruising might not appeal to everyone, but as I sip my frozen daiquiri on a recliner at the ship’s pool bar with acoustic ballads being strummed on a ­guitarist in the background, I think I might, just might, be able to get used to it. 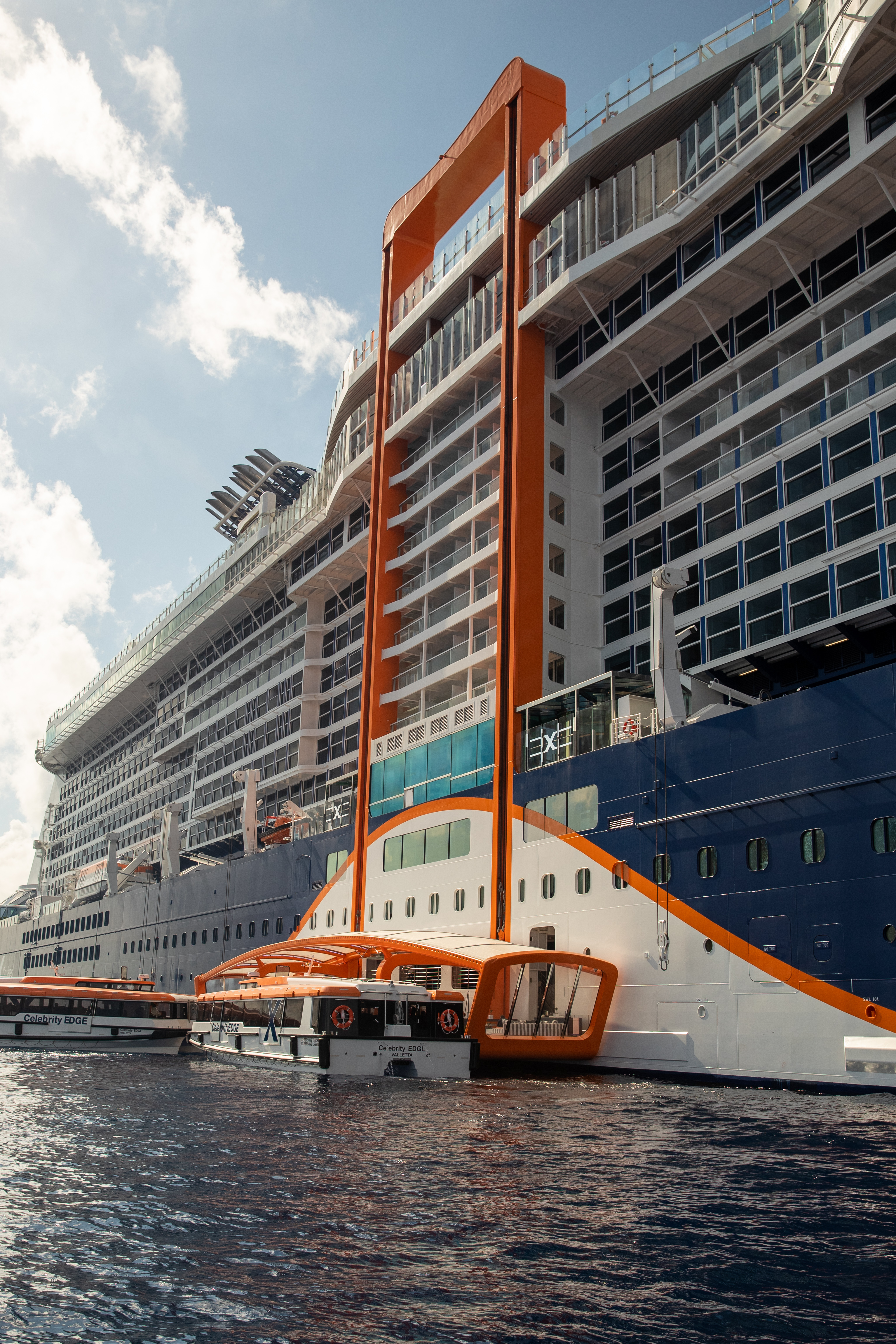 I’m on a short — two-night — cruise to experience the bells and whistles that Celebrity Edge has to offer. And it would be rude not to start with the ship’s top deck and its exhilarating Magic Carpet.

No, it’s not a tacky ride at your local funfair or an attraction that will turn you green.

Quite the opposite — the gentle Magic Carpet is a world-first piece of engineering that literally suspends you above the ocean while you enjoy a delicious cocktail or afternoon tea.

It has also reinvented the ­mundane experience of getting on to a tender to arrive in port.

The Magic Carpet’s movable arms mean you can be transported from Deck 15 to Deck 2 to embark on your tender in style.

Rising up to Deck 16, it becomes an extraordinary sky-high restaurant — Dinner On The Edge.

It is just one of the 29 restaurants, cafes and bars on board the 3,000-capacity ship. 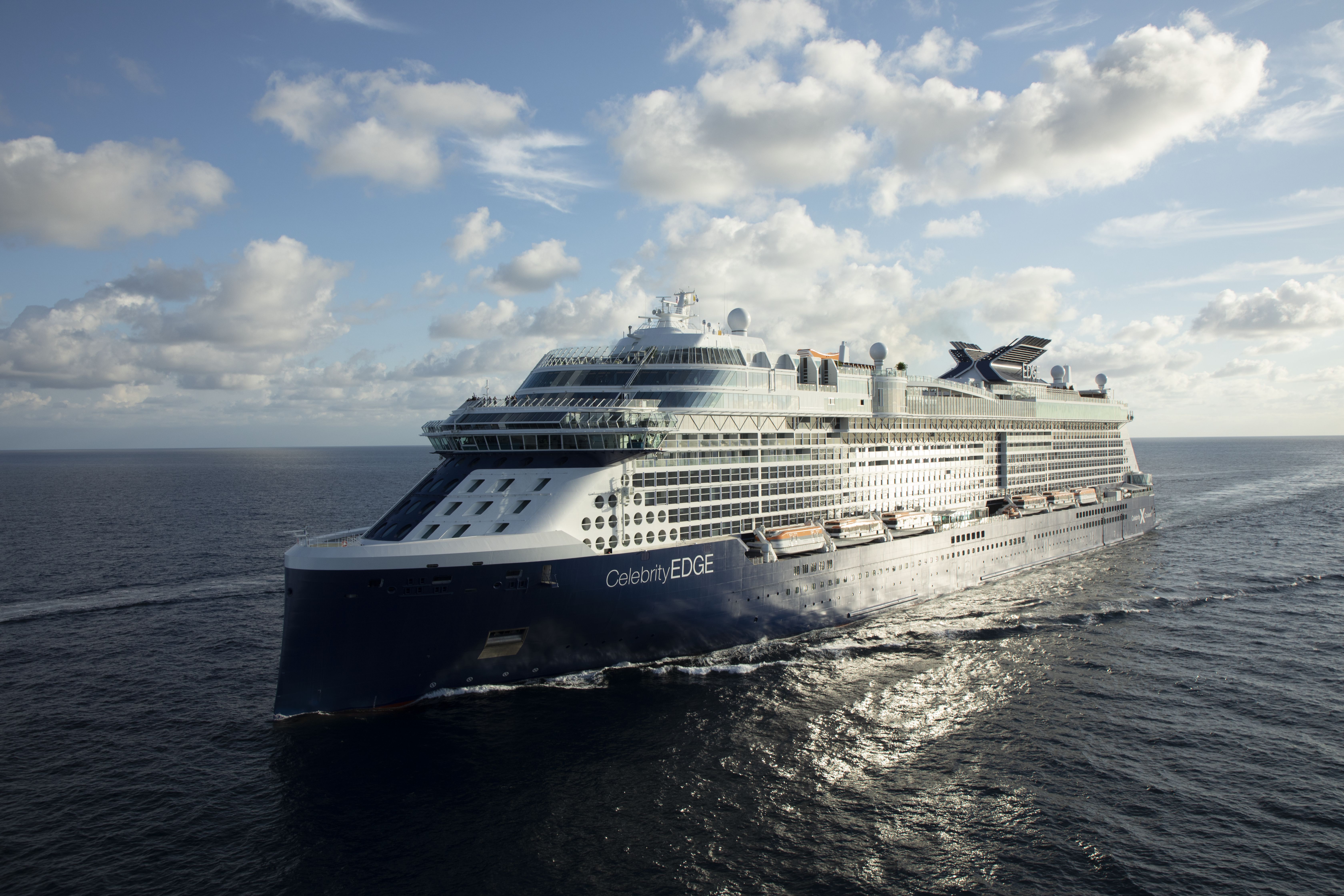 One of my highlights during the trip is bistro eaterie Le Petit Chef — luckily not a take on the old motorway cafe. This eating ­experience is one you definitely won’t want to rush.

While your food is whipped up in the kitchen, an animation is projected on to the table showing cheeky cartoon chefs grabbing the ingredients and cooking up your meal on the dinner plate in front of you.

By the end of each of the four stories, the waiter is standing by your table, ready to serve you your chosen meal.

It would be so easy for Celebrity to cut corners and put the food in second place to a novelty dining experience.

But I can say, hand on heart, that the truffle ravioli served on the menu is one of the best things I’ve tasted in recent months.

Attention to detail and meticulous service is quite clearly at the top of Celebrity’s agenda.

Even its onshore excursions have had a modern makeover by way of telly explorer Ben Fogle. 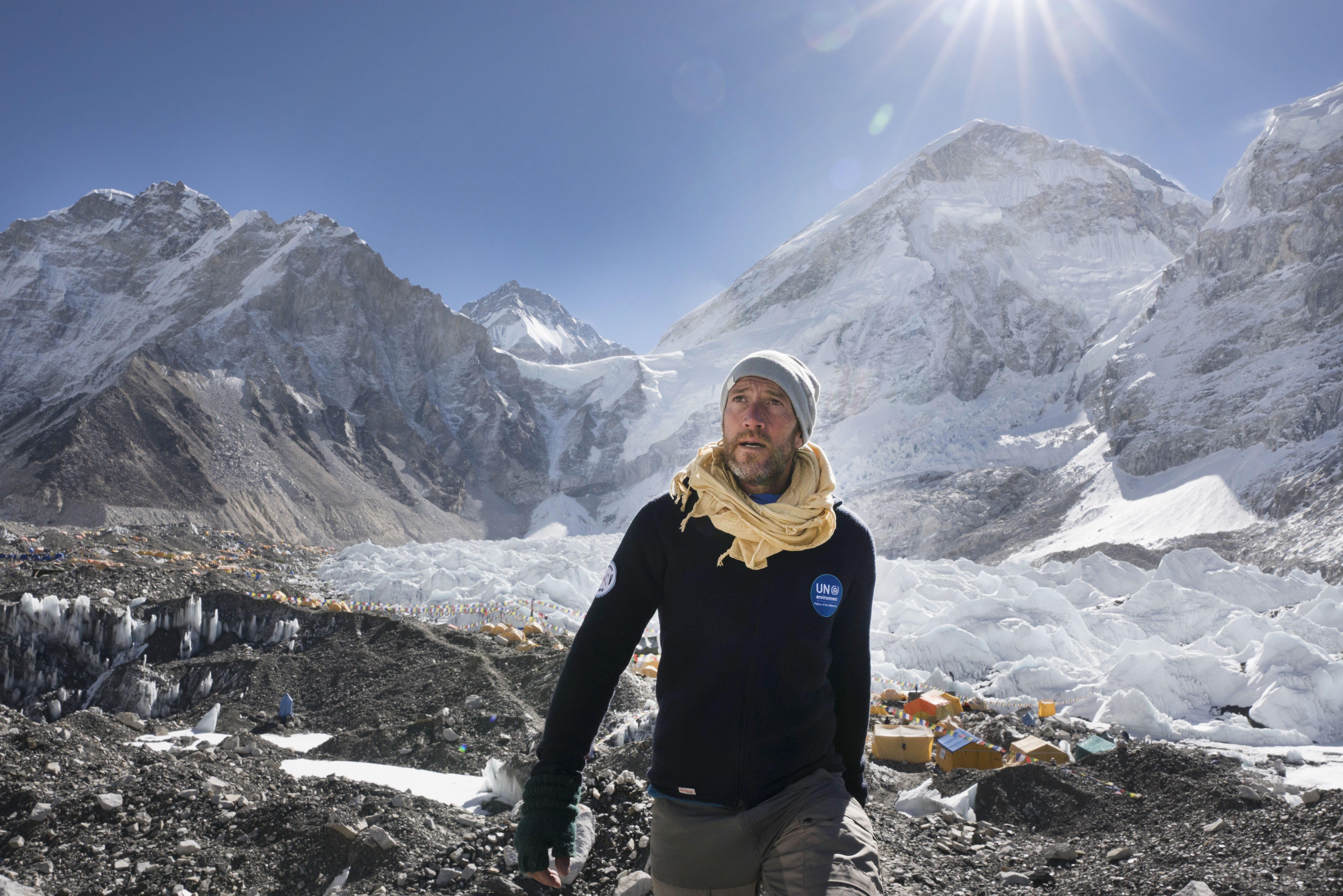 He tells me: “The excursions I have planned are about getting as close to the water, mountains, volcanoes — wherever it is you want to go.

“You’ll climb a volcano in ­Santorini and have a picnic on the top of it or you’ll go kayaking in Alaska while whales are breaching all around you.”

But not all of Ben’s wild ideas have been a hit with passengers.

He says: “One that we actually did do but we got rid of because nobody actually booked it was snorkelling with wild migrating salmon in Norway.

“You’d get into the freezing cold river and snorkel up it, following the migration of the salmon — kind of cool. I think it probably appealed to the passengers but they just didn’t want to get cold.”

There’s just as much care taken with daytime activities as there is with evening entertainment.

As well as the ship’s on-board show, there are trapeze artists in the Eden bar — a tropical oasis — and clubbing in, well, The Club, until the early hours. 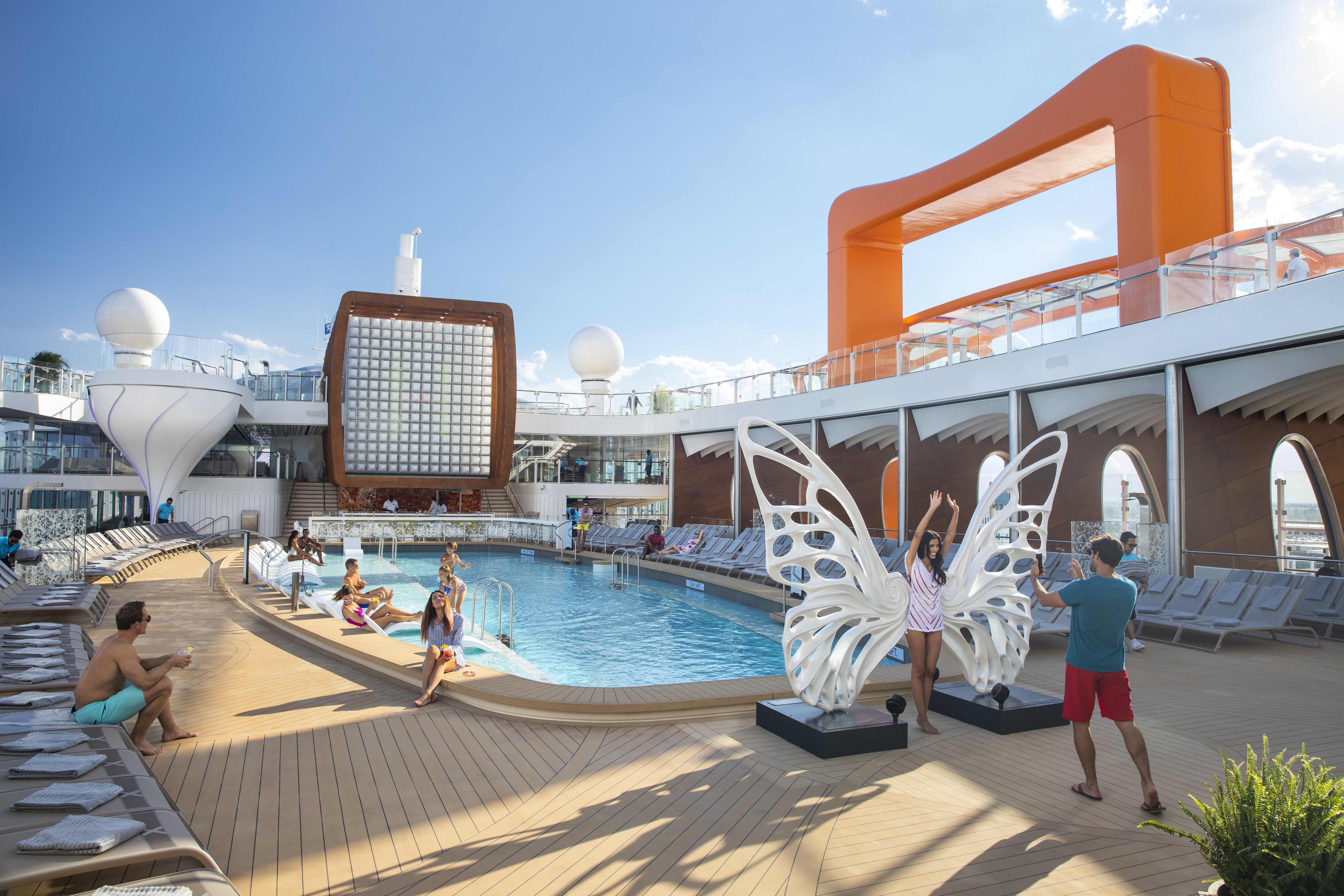 Me and my best mate Jake made full use of the night-time facilities and found our way back to the cabin as the sun begins to rise.

We disembarked with fuzzy heads from a few too many G&Ts, sad that it was over so soon.

I suppose I can manage without karaoke or bingo after all…

THE ship is sailing the Mediterranean this summer.

A seven-night full-board Spain, France and Italy fly-cruise is from £2,124pp in an Oceanview stateroom, including flights from Gatwick on August 3.
Sailing from Barcelona it calls at Valencia, Ibiza, Marseille, La Spezia for Florence/Pisa and Civitavecchia for Rome.