As the sun sets over the waters of Kenya’s Lake Victoria, the soft sound of the lapping waves is drowned out by the hum of motors. Squinting, I can see them on the horizon, the tiny boats splitting the oranges and blues of the twilight sky.

At first only one or two appear, but soon the few become many, a fleet spreading out over the water, appearing to chase the horizon. The vast expanse of the lake, the largest in Africa, appears to swallow the boats as darkness descends. But I know their destination and goal: the fishing grounds and the silver cyprinid — known as omena in Luo, the local language in this part of Kenya — that stir in the night under the wind-whipped waters. 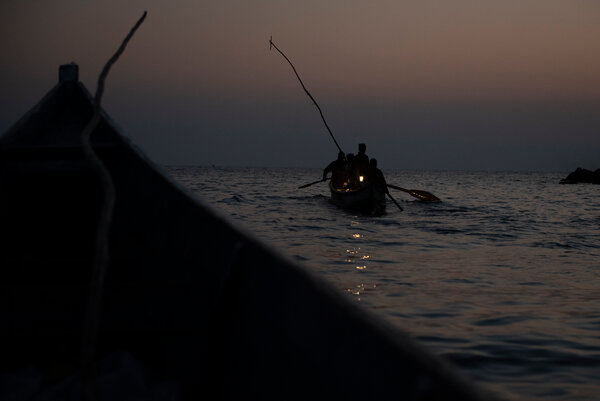 Omena are a type of baitfish, less than two inches long, and these fishermen work the night shift to catch them under a blanket of stars. But as the boats settle into place for the night, the stars are outshone by the lanterns the fishermen float on the waters to attract the fish to their nets.

On Mfangano, a Kenyan island in Lake Victoria where many of the fishermen live, the collection lanterns on the water is known as the City. Hundreds of lights shimmer and meld into a sparkling succession of glowing orbs. The casual observer would see a town, or a highway in the distance. And it’s not until you’re among them, propelled by a fishing boat, that the true nature, and purpose, of these lanterns is revealed.

I’m riding with two local fishermen, brothers named Mike and Robinson Okeyo. They’ve been targeting omena for five years, but the practice of fishing by lantern extends as long as anyone on the island can remember. In the past, most have used paraffin lanterns, but many are now switching to the use of portable (and rechargeable) lights powered by small solar panels.

Looking at the City from the lakeshore, it’s easy to tell the difference between the two types of lights. Paraffin lanterns glow orange, in stark contrast to the metallic blue emitted by the rechargeable lights.

But it’s not the type of light on the lake that’s causing a problem. Instead, it’s the sheer volume: The number of fishermen continues to grow.

I first heard of the tradition of fishing by lantern while working as a consultant for nongovernmental organizations in Kisumu, Kenya. While Kisumu is also on the shore of Lake Victoria, it takes a three-hour drive and a ferry ride to reach Mfangano Island.

To me, the long trip in a cramped matatu — a common form of local transport where 12 people often pack into a nine-person van — was worth it. The idea of fishermen casting lamps into the water as the sky turns from orange to blue was too much to resist. But the reality of the situation on the lake is far less peaceful than my imagination conjured.

Robinson Okeyo estimates that there are now more than 400 boats fishing for omena every night. While in the past many fishermen lived and worked on Mfangano Island, more and more are coming from the surrounding towns on the shore of the lake.

The draw of the omena is obvious. Despite the high numbers of fishermen, it’s still a much easier fish to catch when compared to Nile perch or tilapia, which have been chronically overfished despite restrictions on the size of fishing nets. “It’s the only reliable fish, because it’s so easy to catch,” Mike Okeyo tells me. And to emphasize the point he adds, “Tilapia and Nile perch take too much sweat to catch.”

The ease of catching omena might be relative, though, as the fishermen have to spend the entire night on small boats, with crews of up to five people. The nights are long, and clothes get wet despite the homemade waterproof jackets the fishermen wear. No catch is guaranteed. Competition has increased so much that at times violence has erupted on the lake — which, in a worst-case scenario, has resulted in drownings.

In other cases, Kenyan fishermen have found trouble with Ugandan authorities, as the border between Uganda and Kenya lies less than a mile off the tip of the westernmost point on Mfangano Island. The penalty for crossing the unmarked border on the water can be huge, levied as fines or the confiscation of equipment.

But, at the end of each night, crews of omena fishermen haul in their lanterns and head to shore, where the price of omena is higher than it has been in the past. Fishermen typically sell to two types of customers: locals who dry the fish and sell to consumers, or companies that use the fish in the creation of animal feed.

Regardless of the customer, the wages earned help almost everyone in the community. “The fishing industry has positively impacted the lives of the fishermen and people of Mfangano Island,” Robinson Okeyo explained. “Several youths are investing in the business, which in return is creating employment opportunities.”

As I watch the fishermen sell their catch in the morning light, I’m struck by the difference in size of each individual omena in comparison to the hands of the locals that use them to feed their families. So many people — in this case entire communities — rely on the ecological balance of a minuscule fish. The situation is delicate. But as I remember my view from the water, watching the lanterns glow across the horizon, I can’t help but feel that this unsteady balance between people and their ecosystem remains a beautiful dance.