A 16th-century noble family’s home in booming Lisbon sat empty for decades until H10 Hotels transformed it into an 83-room hotel. After an extensive refurbishment, the One Palácio da Anunciada opened in February, cascading theatrically up the hill behind the street, with sumptuous rooms, staircases and courtyards appearing where you least expect them. My partner, Scott, and I arrived at 12:30 p.m. and, after a welcome drink, were checked into our room.

You’d be hard-pressed to pinpoint a more central location for exploring the Portuguese capital, one cobblestone street from the famed Avenida da Liberdade, a five-minute walk from Rossio Square, and down the block from Lisbon’s first funicular train, running since 1884. The One Palácio blends in well — its facade doesn’t announce itself as a large hotel. A number of nearby restaurants skew touristy. 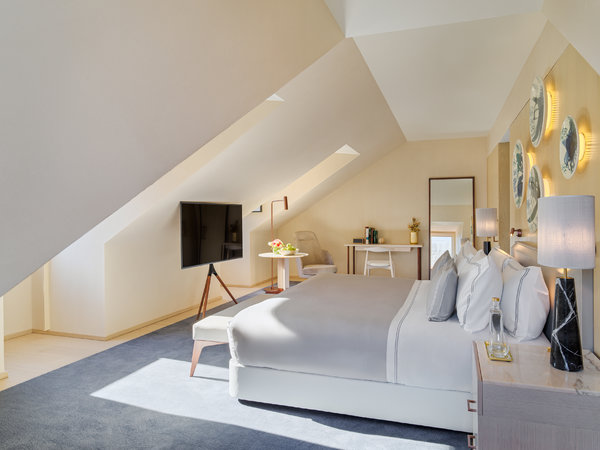 After the grandeur of the lobby, I was not expecting the contemporary minimalism of our Deluxe Room. But it was so well executed that within minutes it seemed the only way to go. A plush gray-blue rug covered expansive oak floors, setting the tone for inspired takes on other elements, including a spacious desk, a marble table and large swivel chair, and a TV atop an elegant wooden tripod, so attractive it became the room’s centerpiece. Even the luggage rack was beautiful.

The hotel also gets technology right. Bedside tables opened to reveal a light switch, two universal plugs and two USB ports each. The lighting throughout was subtle but effective, and easy to figure out. The free Wi-Fi worked well. Framed photographs showed the property pre-renovation — a nice touch — while the windows opened wide onto Lisbon rooftops. Free Nespresso pods sat on a standard minibar next to the closet.

The bathroom made extensive, glorious use of marble from northern Portugal. I appreciated the large shower, powerful hair-dryer, toiletries from Natura Bissé in Barcelona, and lush towels. One complaint: There was just one sink, while photos on the hotel’s website show doubles.

We had a caipirinha and mojito (12 euros each) and delicious mushroom arancini tapas (10 euros) in the ground-floor Boémio Cocktail Lounge, a soaring room that centuries ago housed the palace’s stables. It’s great for daytime coffee and nice at night, except for the lighting that seemed overly bright.

Later, we checked out the upstairs O Jardim Wine Bar, surrounded by the magnificent rooms of the Restaurante Condes de Ericeira, which have restored ceiling frescoes. The adjacent terrace typically seats bar patrons near its fountain and 100-year-old dragon tree, but we hit Lisbon during a cold snap, so sat inside where again, the lighting could have come down a bit. I ordered a tawny port (8 euros) — when in Portugal!— from a bartender who knew his stuff, while Scott had wine (6 euros, twice the typical rate in the city).

At breakfast, we discovered that room service was a work in progress. An à la carte menu was not yet in place (the hotel says it now is), but they accommodated our request of eggs, toast, a ham and cheese crepe, orange juice and lattes in our room for 29 euros, the amount of a single full breakfast downstairs. The food was delivered in 20 minutes, served with a flourish, and was delicious, with pastries and fruit added in.

A small 24-hour gym was tucked into the spa, where we spent an hour in the indoor pool and sauna. Another level up, an outdoor pool overlooked the courtyard. Just off the lobby, a library lounge invited perusing.

One Palácio da Anunciada is a commanding hotel where the imposingly old and fashionably new intermingle to produce a series of spectacular aesthetic moments, much like contemporary Lisbon itself.