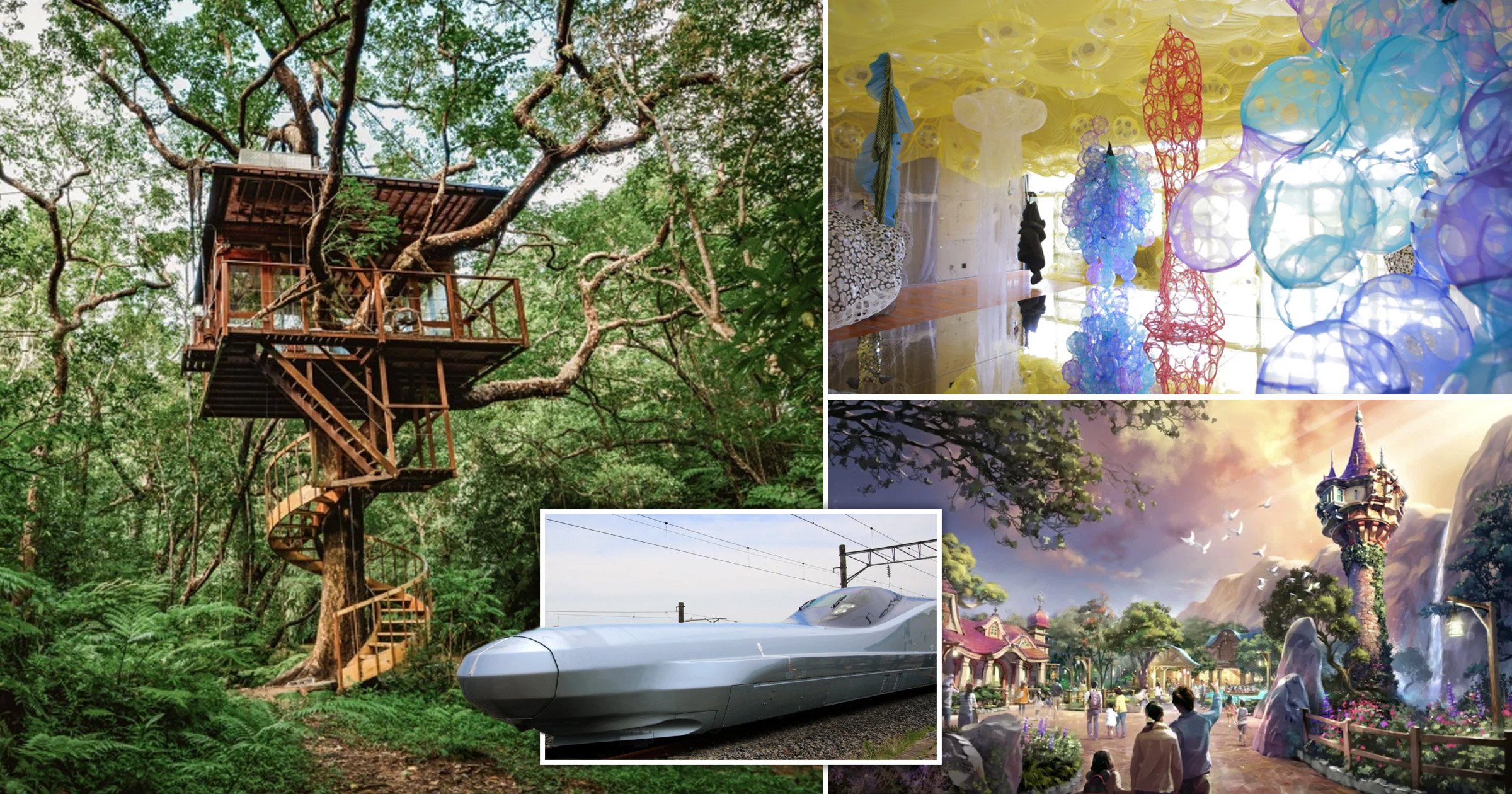 We’re about to say konichiwa to the Tokyo Olympics, but sadly, thanks to Covid-19, there’s no chance of seeing Japan in person this year.

But that doesn’t mean we can’t start planning future trips to the land of cherry blossom, especially as there are lots of exciting new openings for 2022.

Pokémon fans will rejoice at the oppurtunity to do some real-life Pikachu hunting in a brand new attraction at Yomiuriland theme park, while Disney lovers have a very special new kingdom to look forward to.

And if you need to zip between Japan’s iconic cities, there’s a new fleet of bullet trains coming soon that will whizz you to your next desitation.

If your idea of sport is less javelin, more ‘Pokémon battle!’ then you’ll want to make a pilgrimage to the new Pokémon Wonder, located in a vast forest behind Yomiuriland, a theme park on the outskirts of Tokyo.

With games like Pokémon Go and the new Pokémon Snap, an entire forest is available for fans to wander around and soak up the scavenger-hunt experience.

As you enter the 4,500sq m space, you’ll be greeted by the legendary Pikachu and his research cohort Professor Kureso, who will give you an orientation briefing.

Then it’s up to you to spot more than 50 Pokémon species, including the likes of Oddish, Diglett and Rowlett, in the park’s gorgeous surroundings. It runs until April 2022.

Japan might be crowded but you can still find some splendid isolation. The sustainable Treeful Treehouse eco resort, powered purely by solar energy, is due
to open soon in Okinawa, Japan’s most southerly collection of islands.

Designed to bring guests closer to nature, its secluded private rooms are located right among the jungle canopy and offer up 360-degree views.

There will also be a communal Aerohouse space – equipped with bathrooms, rest and relaxation rooms, and a kitchen – connected to the treehouse rooms via a series of floating walkways and jungle paths.

From your lofty base, you can explore the rugged coastal area, with both intrepid treks and time spent on the beautiful beaches.

Billed as ‘a foremost art festival at the furthest edge of the world’, the Oku-Noto Triennale 2020 – delayed from last year due to the pandemic – takes place on the very tip of the Noto Peninsula in Ishikawa prefecture on the coast, on the other side from Tokyo.

Don’t miss the Okura Zarae project, which displays local folk tools and other once-commonplace items from the past together with recollections from their owners.

The objects have been collected from private warehouses with the help of local residents, folklore experts and artists.

From September 4 to October 24.

Japan has creativity bleeding out of its eyeballs so it’s no surprise that epic, over-the-top theme park Tokyo DisneySea is planning an expansion, which is due to open towards the end of next year or in early 2023.

Named Fantasy Springs, the site will add four attractions to the park based on popular Disney movies including Tangled, Frozen and Peter Pan.

Visitors will be able to discover Anna and Elsa’s kingdom of Arendelle, the forest and tower where Rapunzel lives in Tangled, and Neverland, home of Peter Pan.

Neverland already sounds ridiculously exciting: one attraction will fly guests over the jungle into a battle with Captain Hook and his crew to rescue Wendy’s brother John.

No trip to Japan would be complete without a zoom on a bullet train, and two new ones are launching within the next few years.

Last year saw the trialling of the new Alfa-X experimental bullet train on the Tohoku line that connects Tokyo to Shin-Hakodate-Hokuro in Hokkaido.

It is hoped that the new fuel-efficient service will cut in half journey times on the line thanks to speeds of up to 360km/h (it beat records by doing 382km/h on its test run).

In addition, there will be an extension to the line connecting passengers to Niseko ski resort and Sapporo city by bullet train from Tokyo by 2030.

Finally, a new high-speed six-car train called the Kamome – meaning seagull – will be introduced on the Kyushu Shinkansen’s new western route in autumn 2022, linking Takeo Onsen – a town at the south-western tip of Japan that is famous for its hot springs – with the city of Nagasaki.

Don’t miss out on these iconic Japanese cities

Japan’s bustling capital is full of must-see sights, from the hair-
raising Shibuya Crossing to the former Tsukiji fish market and the Tokyo Skytree (billed as the tallest tower in the world).

Known as ‘temple town’ thanks to the more than 2,000 temples and shrines across the city, you can’t miss the gold leaf-covered Kinkaku-ji or Ryoan-ji, with its alluring Zen garden.

Foodies should head to this city, as it’s one of the best places to eat in the country.

Try local delicacies such as takoyaki, fried balls of octopus and okonomiyaki, a savoury pancake.