My new-found Bond with pukka Phuket: Exploring the lush Thai island where The Man With The Golden Gun was shot

They say an elephant never forgets (and nor should they with a 5kg brain) — and I certainly won’t either.

Not now pride of place on my kitchen table is a lustrously painted wooden elephant, a souvenir of a recent four-day swing to Phuket, the lush island off the south of Thailand.

It’s a long way, sure, especially for a lightning break, but anyone thinking of a quick hit of winter sun could do worse than make tracks to this beautiful place. They are moving into high season now but, trust me, you can pack a lot into a week here. 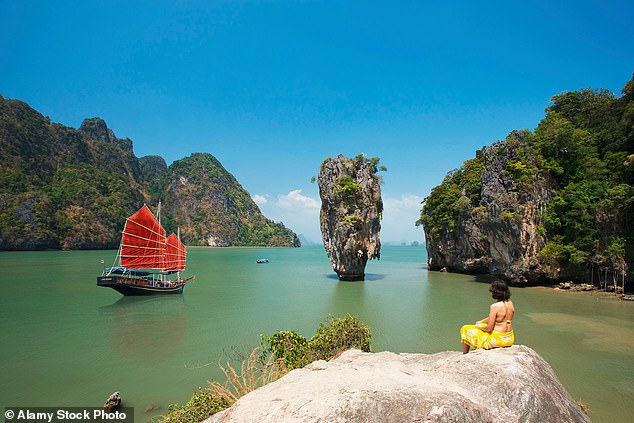 Star quality: James Bond Island in Phang Nga Bay. It was villainous Scaramanga’s lair in 007 film The Man With The Golden Gun

Everyone knows about Thailand, of course: you could run a permanent film festival with the movies that are set there, from James Bond to The Beach, not forgetting Hangover 2 and endless versions of The King And I.

But as a Thai virgin, so to speak, nothing prepares you for the astounding greenery, the intense lushness, the breathtaking views, the food, the wildlife (of which more later), and the great friendliness of everyone you meet.

Whatever else you do, on no account miss a visit to the Phuket Elephant Sanctuary. And accept no imitations; they may be lovely people, the Thais, but there are a few unscrupulous camps on the island pretending to offer an ethical and humane home for these giants.

But this is the only real one. The pachyderms are all female, because, believe it or not, they are less aggressive and can be guaranteed to behave better. Who’d have thought it?

So now these elderly ladies are treated at their first proper home, as they deserve to be, with the utmost respect. The sanctuary is set in 30 acres of lush jungle, where these wonderful beasts enter retirement after decades of abuse and mistreatment while working in logging and tourism, often kept in chains.

You get a chance to feed them — a vast amount of watermelon, pineapples, carrots and every kind of quality fruit and veg these ladies can get through.

They’re Asian elephants, so marginally smaller than Africans, and with slight pigmentation. There are no elephant shows here: these gentle giants just trundle about, enjoying the trees and the water and splashing around with their friends, in the hands of their clearly devoted mahouts (keepers).

You can walk through the forests with them, just a few metres behind, as the largest mammals on the planet happily chomp, bathe and relax.

‘Look at them,’ says Vincent Gerards, the young Belgian marketing director of the Sanctuary. ‘They are free now, these stately, gorgeous creatures, and happily socialising with their friends: enjoying their lives at last.

‘I didn’t know much about elephants before I got here, but now you can see their importance to the ecology of the planet.’

A visit makes for a marvellous and immersive experience: not surprisingly, the place has significant A-list approval with visits from Leonardo DiCaprio, Britney Spears and Coldplay among others. There is no public access to the sanctuary, but there are morning and afternoon tours, though you do have to book early. 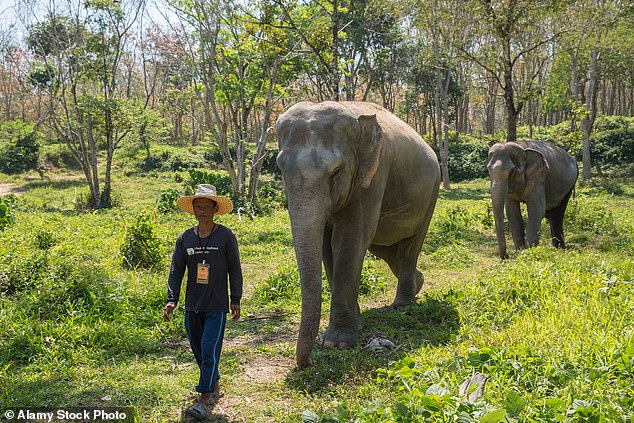 The Sanctuary picks you up from its nearby office and drops you back afterwards. It is a rare chance to have a unique (and environmentally aware) experience. Not to be missed.

If you can remember villainous Scaramanga’s lair in 007 film The Man With The Golden Gun, the jaw-dropping landscapes of Phang Nga Bay won’t come as a complete shock — but, golly, take a boat trip out into the bay and prepare to have your mind well and truly blown.

Just ask for ‘James Bond Island’: there’s not a boat operator who won’t know what you’re talking about. Vast limestone cliffs draped in jungle and evergreen mangrove forestation soar vertically out of the lime-green sea. And in the caves and hollows you can see little macaque monkeys play — and show off.

For more inaccessible crannies, we take out kayaks, laying back so as not to graze our heads in the tight spaces as we slide silently through the little hollows and into the pools beyond.

We enjoy lunch on a virtually empty beach after swimming in vivid water as warm as a bath. Take care when you swim by the way: the currents are strong. The red warning flag isn’t put up for fun: it means don’t swim. 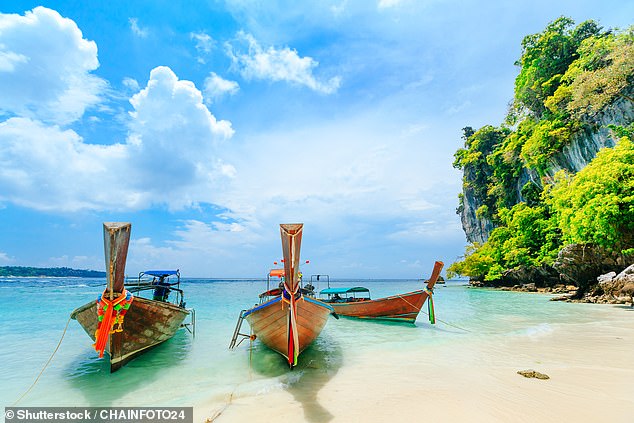 Phuket, pictured, is the the lush, green island off the south of Thailand

It wouldn’t be Thailand, though, without a good dollop of wellness. Our hotel, the excellent Banyan Tree, positively glows with the stuff.

The acupressure massage, I am told, is incredible: ‘We all emerged like we had been reborn,’ said my friend Fliss. It starts with a foot massage and ends with ginger tea. What’s not to like?

You can try some Thai boxing in the expert hands (and gloves) of ex-professional Khun Em, who during his career has broken four ribs and both knees so should know what he’s talking about.

I also spent an aromatic hour or so in the herbal workshop — never a sentence I thought I would write — and my little bottle of sweet-smelling stuff is still on my desk. A help in stressful times? Quite possibly.

You can kayak just after sunrise on the still lagoons, or jog along the nearly two-mile beach. And any time use the lavish spa facilities: this hotel runs a Spa Academy so you should get well treated. If you’re not overflowing with wellness at the end of all this, there’s something wrong with you.

And then, of course, there’s the food: clean, healthy, endlessly delicious — chicken breast and beef satay, prawn wrapped in crispy rice, shrimp tempura, fresh wild salmon and so on.

I was especially struck by a visit to Seedlings restaurant, a terrific enterprise to help local youngsters from deprived or poverty-stricken backgrounds get back on their feet, working and cooking in the restaurant.

Britain can learn from Thailand: food and cooking is a bizarrely neglected route to rehabilitation here in the UK.

All too soon, I left for the airport with a bag full of an array of Thai snacks — coconut chips, soft dried mangoes, fruit toffees and tom yum flavour cashew nut cookies. Great memories, but I would rather the real thing.