Make room for neighbors on your next Delta Air Lines flight.

The airline will end its yearlong practice of blocking middle seats on May 1, company officials announced Wednesday.

Delta had extended the popular policy several times during the pandemic, most recently in February, when it said it would keep middle seats open through April 30, a period that covers spring break and Easter getaways.

United never blocked seats, and American Airlines abandoned the practice of blocking some seats last summer, a move that drew scorn from the director of the Centers for Disease Control and Prevention.

Delta CEO Ed Bastian, who warned last year that open middle seats wouldn’t last forever, said in a statement that the airline’s return to selling all seats is based in part on increased COVID vaccinations. He said 65% of passengers who flew Delta in 2019 expect to have at least one dose of the vaccine by May 1. 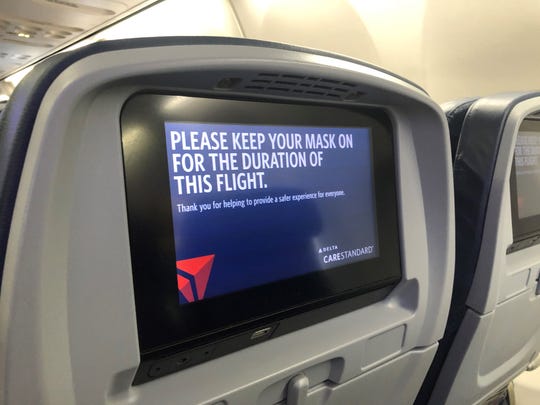 Throughout the pandemic, vaccination rates and consumer behavior have

been Delta’s benchmark on whether to keep blocking seats or end the practice, he said.

The airline was no doubt feeling financial pressure, too, blocking a third of its seats at a time when travel is rebounding strongly, at least in the United States and shorter international flights to vacation spots in Mexico and the Caribbean.

Delta has long touted its open middle seat pandemic policy and said it has lured travelers to the airline, helping boost ticket sales.

“No question about it, we are generating a meaningful (revenue) premium due to that decision,” Bastian said this year on the airline’s earnings conference call.

The airline is trying to bill the unblocking of middle seats as a positive, telling customers they will now be able to choose any available seat.

It’s part of a series of changes announced Wednesday, including a return of more in-flight food and drinks beginning April 14.