The 49 coolest neighbourhoods in the world for 2021 named by Time Out: Norrebro in Copenhagen is No.1, with Andersonville in Chicago second and Leith in Edinburgh fourth

The coolest neighbourhoods in the world have been named by the influential Time Out guide, and Norrebro in Copenhagen has claimed the top spot.

Coming second in the guide’s annual ranking is Andersonville in Chicago, with Jongno 3-ga in Seoul seizing third place. Leith in Edinburgh just misses out on the top three, coming fourth, while Dalston in London and Dublin 8 in Dublin both make the top 15.

The list was put together using a global survey of 27,000 city-dwellers, along with the opinions of local Time Out editors and city experts. Scroll down to find out more about the top 15… 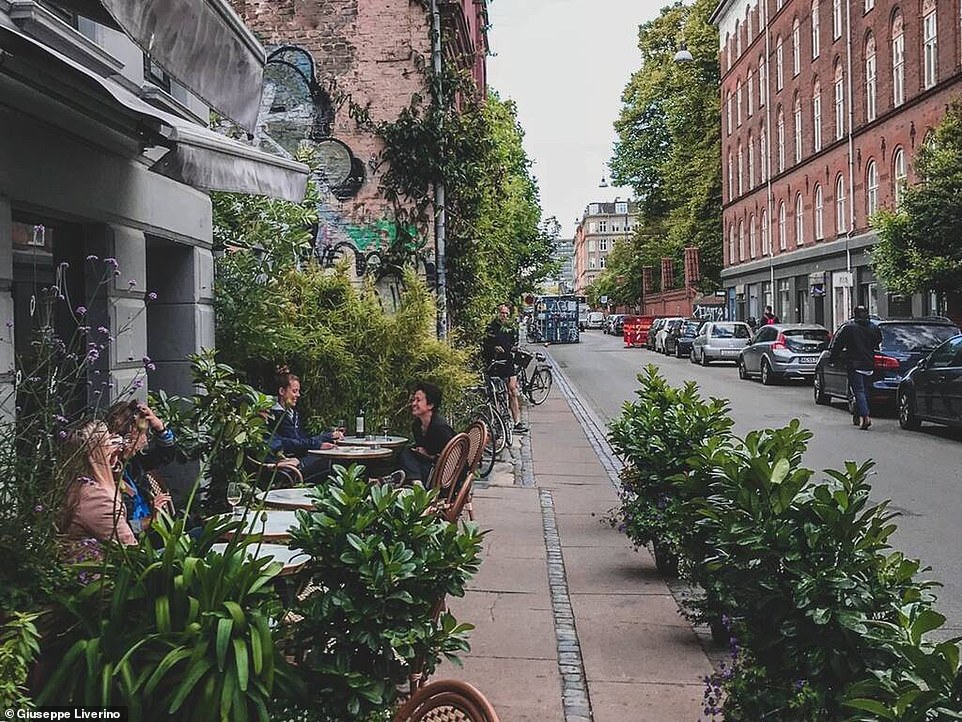 Norrebro (pictured) has been revealed as the coolest neighbourhood in the world, according to Time Out’s annual ranking

Coolest neighbourhood winner Norrebro is ‘a diverse district where history meets ultramodern architecture on the northern side of Copenhagen’s lakes’, according to Time Out, which adds that the area ‘truly has it all’.

In a city proudly known for its food and drink scene, Norrebro has seen a flurry of new openings this year from bakeries to natural wine bars, all with a focus on local, seasonal – and often foraged – produce, according to the guide.

It continues: ‘The neighbourhood was host to the city’s Pride march this summer, when WorldPride came to Copenhagen – the most significant LGBTQ+ event in the world.

‘In a year where community has been more important than ever, Norrebro has no shortage of innovative initiatives including Norrebrogade’s Car-Free Sunday where traffic is swapped for live music and flea markets, and Usynglige Stier – ‘Invisible Paths’ – a new, interactive art exhibition that brings fun and a splash of colour to the neighbourhood’s most vulnerable areas.’ 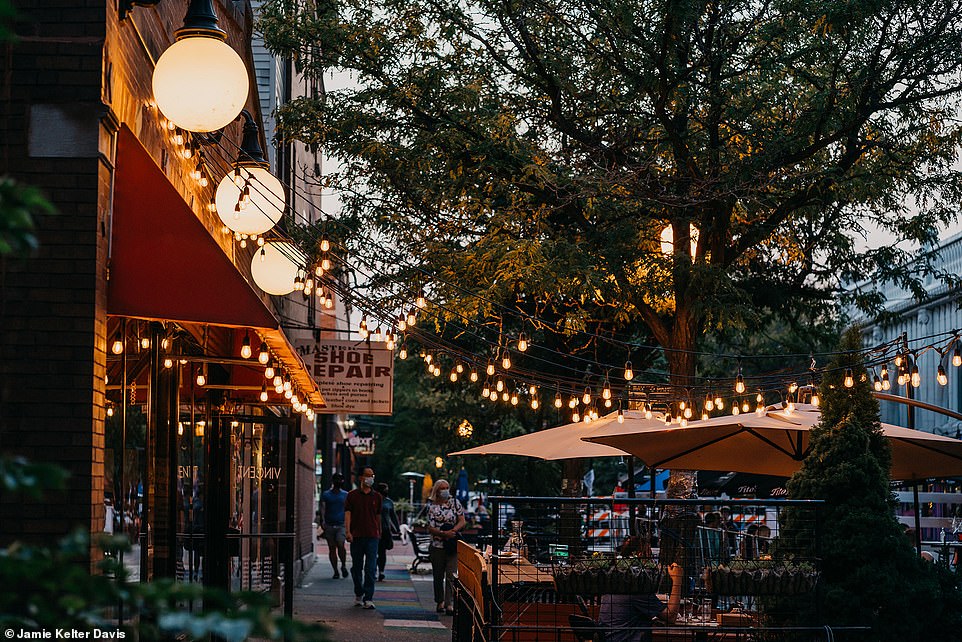 Time Out has named Andersonville, pictured, as the coolest neighbourhood in the US, and the second-coolest in the world

Silver medal winner Andersonville is a historic Swedish district now best known for its LGBTQ+ nightlife and the Clark Street corridor of bars and restaurants, according to Time Out. It reveals that the area has had new openings aplenty in the past year and the Taste of Andersonville event spotlights beloved local institutions.

The guide explains: ‘Andersonville’s proximity to beaches and coastal parks has made it an even more appealing place to live and visit in the past 18 months, with a conscientious community launching initiatives like Clark Street Composts – a pilot programme for eco-friendly composting.’

It recommends visiting in June to get involved in Andersonville Midsommarfest, ‘an annual street festival that serves as a celebration of the area’s Swedish heritage, local businesses and LGBTQ+ culture’. 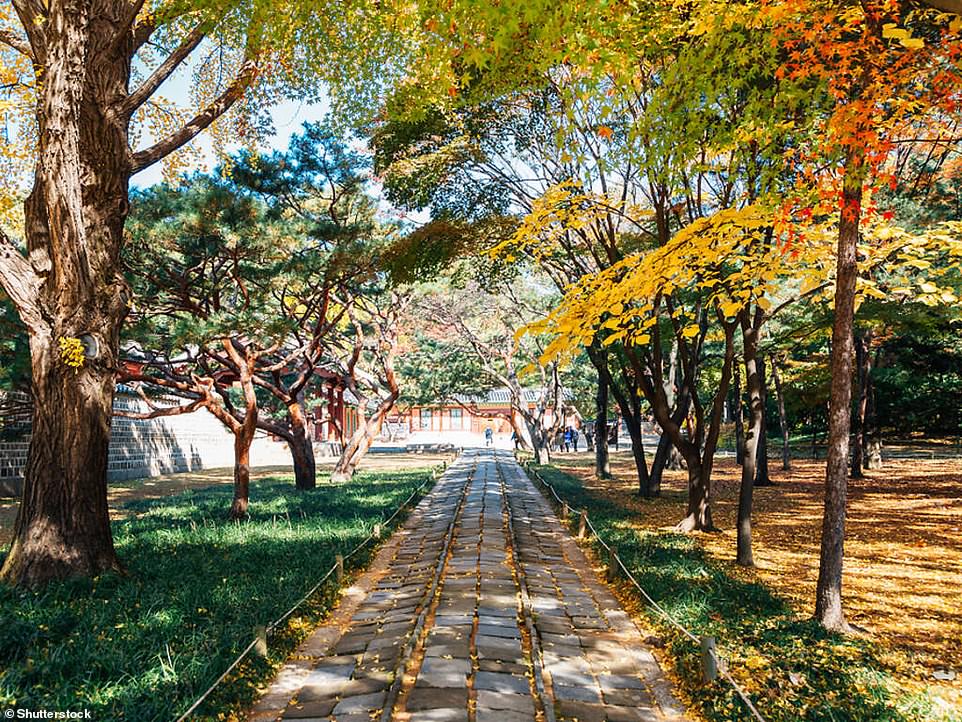 Time Out has dubbed the Jongno 3-ga neighbourhood, pictured, as ‘the heart and soul’ of Seoul

The title of the world’s third-coolest neighbourhood goes to Jongno 3-ga in Seoul.

Surrounded by well-known palaces, galleries and other tourist spots, historic and eccentric Jongno 3-ga is the heart and soul of the city, according to Time Out, which recommends keeping an eye out for the cart vendors selling traditional toffee on Songhae-gil.

The guide adds: ‘You’ll also want to hit up its jewellery shops, the restaurants serving North Korean food and the many hidden cafes and beer houses. It’s also home to Seoul’s LGBTQ+ district, which is vibrant and bustling once more after a tough 18 months.’ 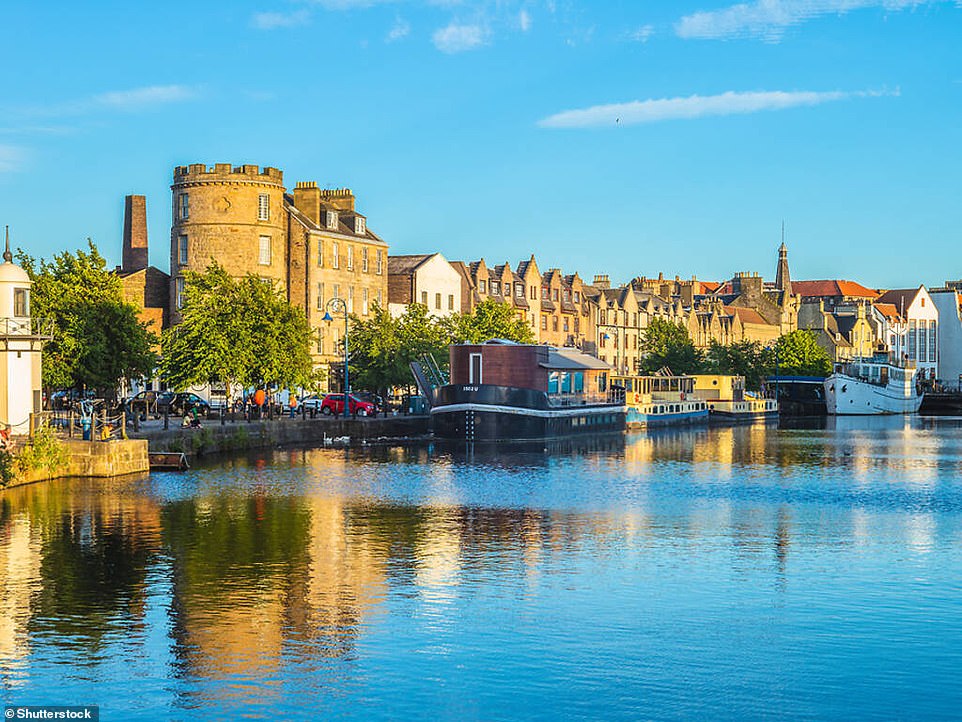 Leith, pictured, is home to ‘big arts institutions’ and a Michelin-starred restaurant

Time Out says: ‘This North Edinburgh neighbourhood is best known as a cultural melting pot, home to big arts institutions like the once-abandoned Leith Theatre, alongside up-and-coming spots like the Biscuit Factory with its performance space and workspace for more than 30 creative businesses.’

Looking for something to eat? The guide recommends The Leith Arches, ‘a two-tiered pub and events space and home to rotating food vendors, a programme of wellness events and the always-excellent Bross Bagels’. Alternatively, it advises heading down to the harbourside to Michelin-starred The Kitchin, which it bills as ‘one of the best restaurants in the UK’. 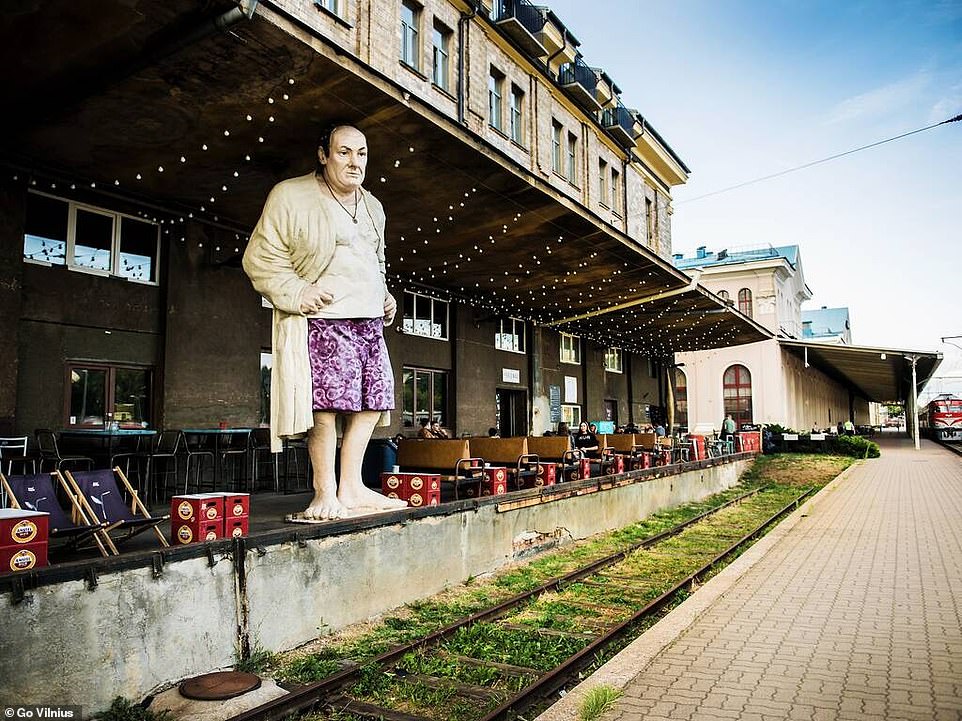 According to Time Out, you’ll find the best street art in Vilnius in the Station District – including a giant Tony Soprano statue (pictured)

Station District is the world’s fifth-coolest neighbourhood, according to Time Out, which says the area ‘is the creative soul of Vilnius where you’ll find the city’s best street art, including a giant Tony Soprano statue’.

The guide reveals: ‘It’s packed with cafes, international cuisine and clubs and venues in the most stunning Soviet buildings: from Kablys, a riotous nightclub with a Berghain-style door policy to the Loftas Art Factory, a factory that’s been turned into a sprawling community-oriented venue hosting gigs, fashion shows and screenings.’ 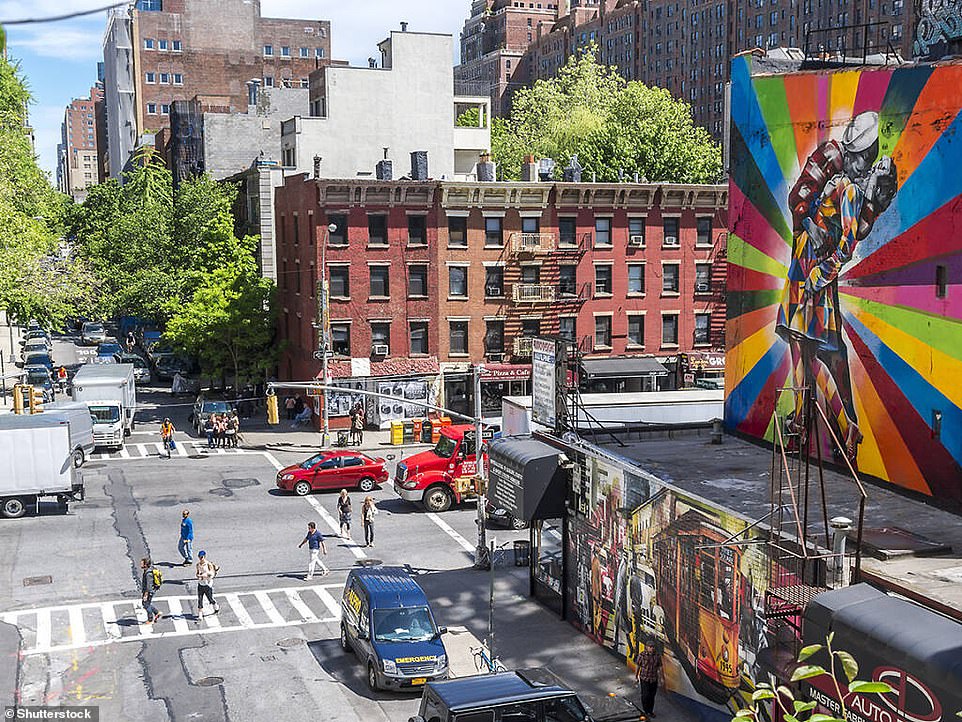 For the first time in three years of Time Out’s Coolest Neighbourhoods list, a Manhattan district has taken the top spot in New York. Last year, Bedford-Stuyvesant in Brooklyn claimed the title, and Astoria in Queens reigned supreme in 2019.

According to the guide, Chelsea is making huge strides and setting a great example when it comes to sustainability, community and green space.

It says: ‘Little Island, which is a new floating park, The High Line and Hudson River Park have all provided open space for people who needed it more than ever in 2021.’ 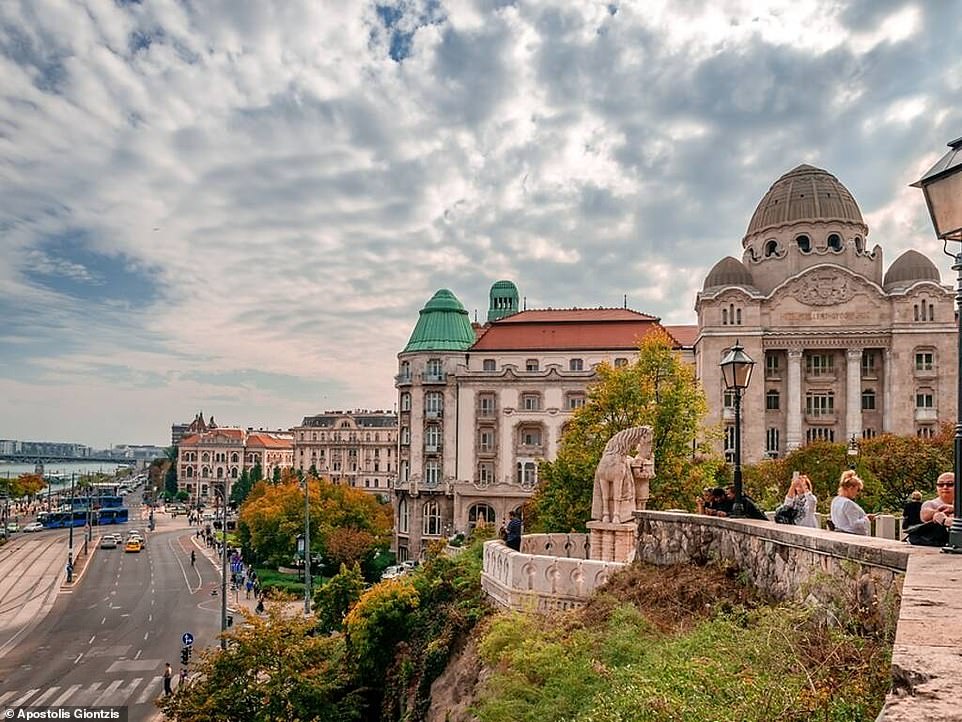 The XI District in Budapest (pictured) is home to ‘bohemian cafes, bars and independent art galleries’, says Time Out

Budapest’s XI District, which is also known as Ujbuda, stretches south along the Danube and until recently was mainly known for the art-nouveau Gellert Baths, says Time Out.

The guide reveals that in the past year, much of the city’s cultural life has migrated to the greener Buda-side of the river – ‘and nowhere is hotter right now than this neighbourhood’. It’s where the bohemian cafés, bars and independent art galleries of tree-lined Bartok Bela Boulevard have become a hub of activity, we’re told.

It adds: ‘There’s also an annual festival that brings concerts, parties and art to the street for a neighbourhood knees-up, and a once-abandoned open-air theatre, [plus] a bar in a former bus depot and even a concert hall on a decommissioned Ukrainian stone-carrying ship.’ 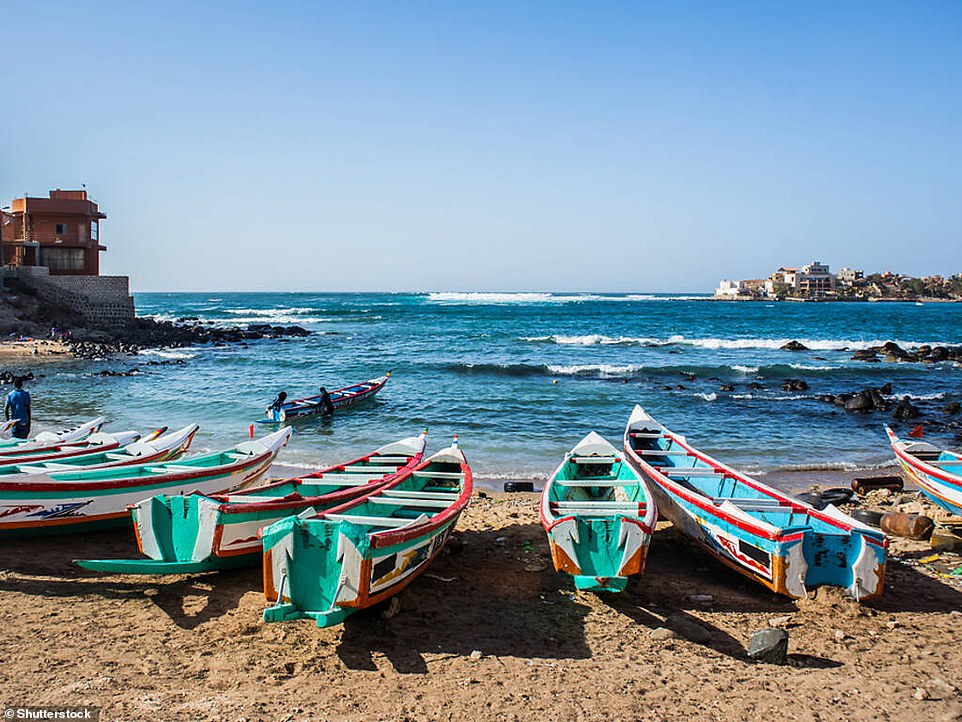 Time Out reveals that you’ll find diving, fishing and surfing in Ngor, on Dakar’s northwestern tip

A district in the Senegalese capital of Dakar has cruised into eighth place in the coolest neighbourhoods ranking. Time Out reveals that in Ngor, on Dakar’s northwestern tip, you’ll find diving, fishing and surfing, as well as vibrant waterfront restaurants and rooftop bars like Bakekou, which serves cocktails and ceviche as night falls.

It says: ‘To preserve Ngor’s beauty on both sides of the bay, local groups, residents and businesses regularly organise beach clean-ups and implement non-plastic initiatives. The Dakar Biennale – Africa’s largest contemporary arts fair – is the perfect time to visit, as the water temperatures start to rise.’ 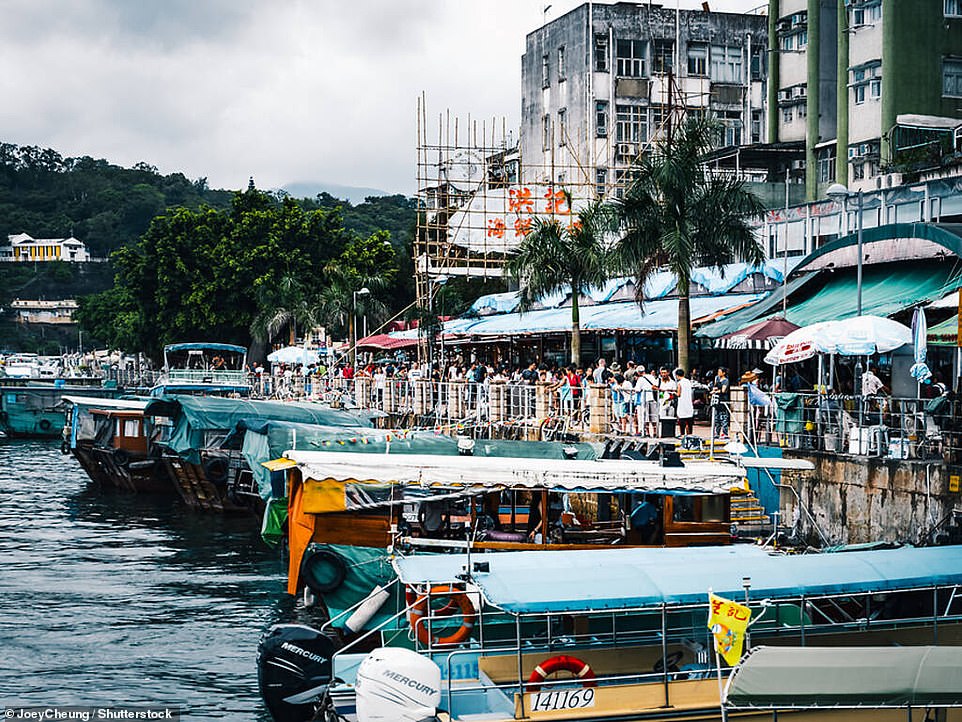 Sai Kung, pictured, is home to idyllic beaches, abundant green spaces, and picturesque hiking trails, according to Time Out

The world’s ninth-coolest city, as decreed by Time Out, is Sai Kung in Hong Kong. The guide says it’s not hard to see why the area is known as the ‘back garden of Hong Kong’ – it is home to idyllic beaches, abundant green spaces, country parks, and picturesque hiking trails. 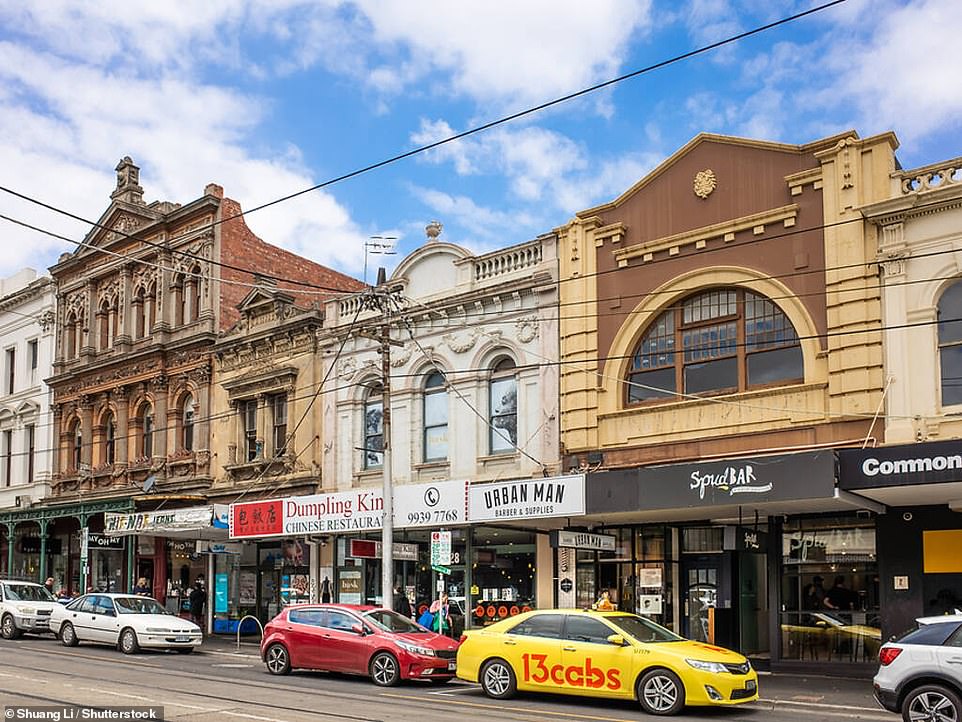 Richmond, pictured, has been named the coolest neighbourhood in Australia – Time Out says the area ‘has it all’

Australia enters the cool neighbourhood fray with Richmond, in Melbourne. Time Out says the area ‘has it all… it is a fabulous location for live music, culture, food, bars and sport, and each of its three main strips has a distinctive feel’.

Victoria Street is Melbourne’s go-to destination for Vietnamese food, according to the guide, while Bridge Road is known for its fashion and furniture factory outlets and Swan Street is home to some of the suburb’s best restaurants and cafes, as well as its sports hub.

Time Out says it is a ‘very community-minded suburb’. It explains: ‘The Richmond Churches Food Centre has been distributing food to those in need for the past 30 years – including throughout Melbourne’s lockdowns. Yarra Council was also one of the first local governments in the world to declare a climate emergency.’ 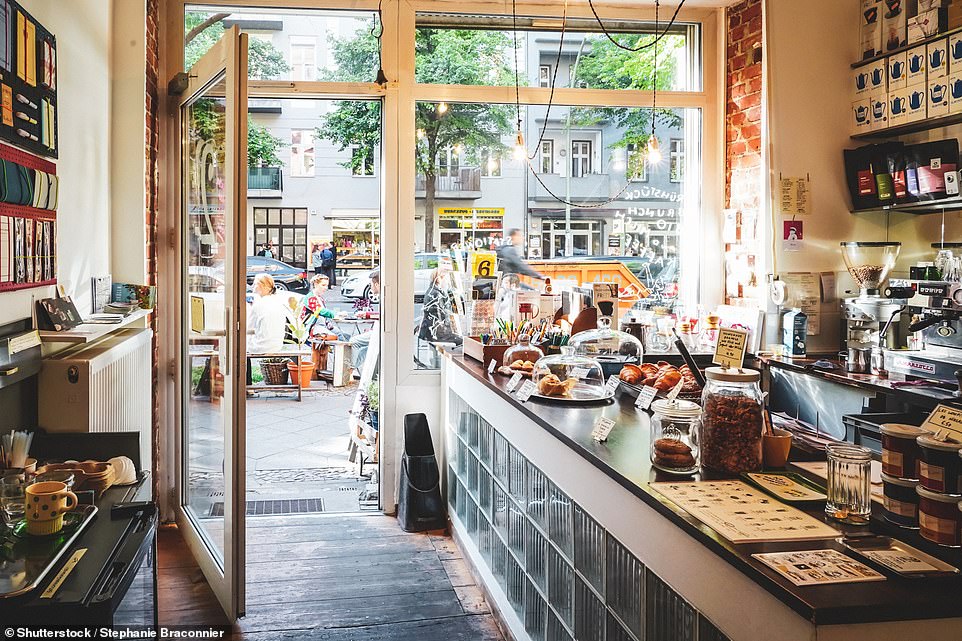 Time Out reveals Neukolln, pictured above, has become an ‘epicentre for protests and demonstrations’

‘The past and the present collide in Berlin, and no neighbourhood captures this better than Neukolln,’ Time Out says of number 11 on the list.

The guide explains: ‘Despite the rise in trendy restaurants, bars and boutiques, the multicultural atmosphere survives with plenty of grocers, cafes and community centres that are owned by the families and immigrants who have long called Neukolln home.’

It also reveals that Neukolln has become an ‘epicentre for protests and demonstrations in favour of racial justice, affordable housing and other social causes’. 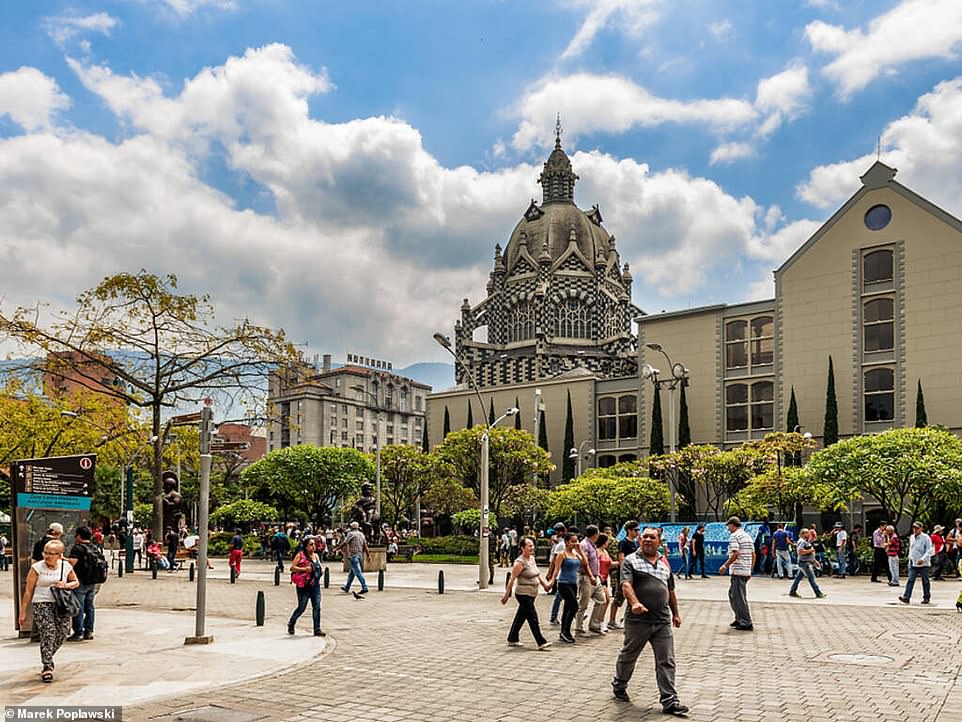 Fancy visiting Centro, Time Out’s 12th-coolest neighbourhood? The guide recommends grabbing an artisanal beer at an indoor market, heading to one of the area’s beautiful, chaotic plazas, or pulling up a stool at one of the many tiny bars that are opening as Medellin emerges from its pandemic slumber.

It reveals: ‘The past 18 months have seen the Centro neighbourhood become a haven of leafy boulevards, cycle lanes and community-led miniature “pocket parks”, which play host to more than 300 newly planted trees. Want your nature with a side of techno? Head to the Baum Park rave in the Botanical Gardens.’ 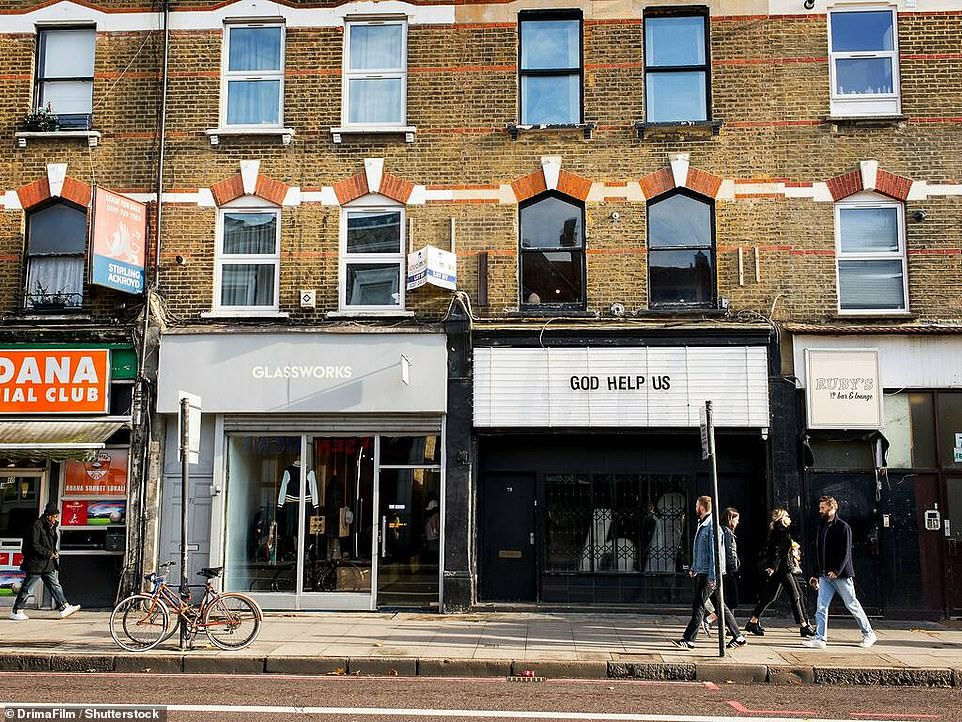 Dalston is England’s coolest neighbourhood, according to Time Out, which praises the area’s pubs and nightlife

Plus, according to the guide, it still retains its moral compass with vegan cafes, second-hand shops and the highest number of Low Traffic Neighbourhood streets in the city.

It adds: ‘Dalston-dwellers are an engaged, energised bunch, regularly getting involved in volunteer work and community initiatives like maintaining the veg patch at Eastern Curve Garden which also plays host to craft and children’s workshops and seasonal events like the annual display of spooky Halloween pumpkins.’ 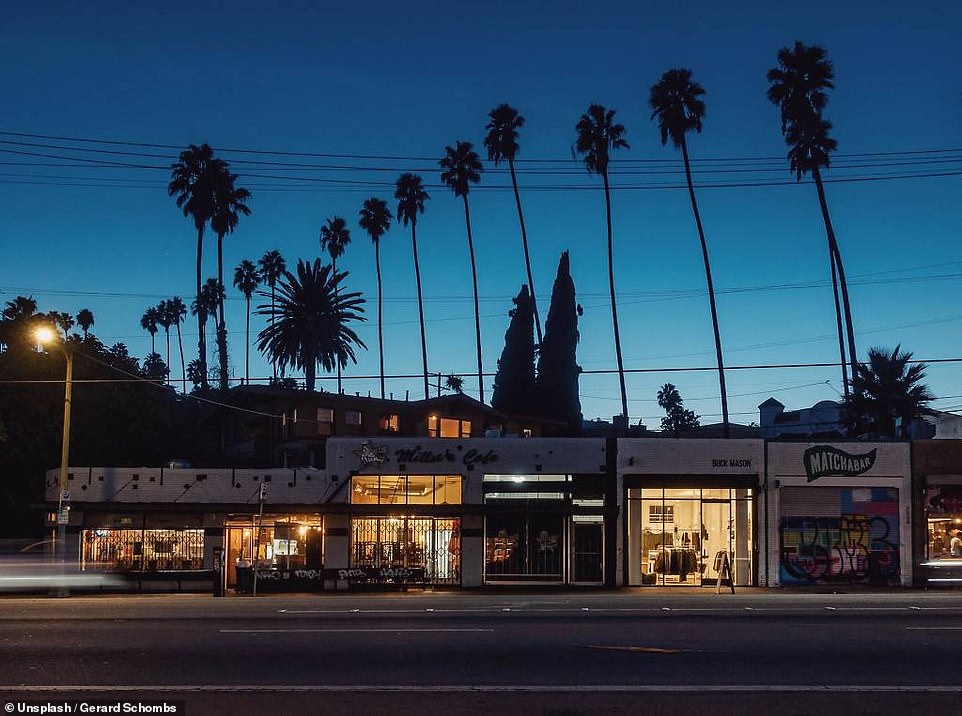 Silver Lake, pictured above, radiates carefree vibes in the face of lingering uncertainty, explains Time Out

Silver Lake is the third neighbourhood in the US to make it into the top 15. According to Time Out, the LA area ‘radiates carefree vibes in the face of lingering uncertainty, from hiking up its colourfully-painted stairs to wandering the Saturday farmers’ market’.

The guide says visitors ought to hop on the new on-demand, point-to-point ‘Micro’ bus and get anywhere in the area for just a dollar.

Time Out continues: ‘Oh, and there’s a renewed campaign to remove the fences and restore the green space at the neighbourhood’s namesake reservoir.’ 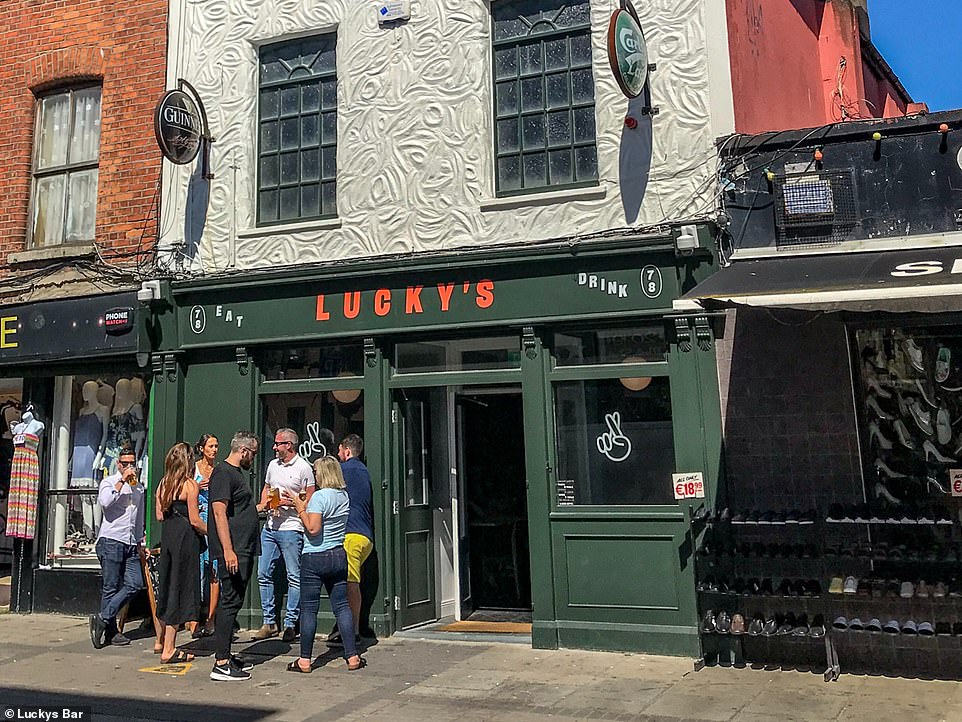 The 15th-coolest neighbourhood in the world is ‘culturally and architecturally unique’ Dublin 8, according to Time Out

Last but not least in the top 15 ranking is Dublin 8, which Time Out says captures the essence and charm of the Irish capital and has managed to stay culturally and architecturally unique while the rest of the city around it develops.

The neighbourhood is the place to find vintage and bric-a-brac shops, street art, museums, markets and quirky cafes, and is also home to some of the city’s most exciting foodie talent, according to the guide.

It advises visiting in the coming months, as from the end of October to January 2022, Dublin Zoo will be transformed by the ‘Wild Lights’ epic art installation. Or, if you prefer your art in a gallery, the guide recommends checking out the Irish Museum of Modern Art.

FROM COPENHAGEN TO SANTIAGO VIA LEITH AND LA: THE 49 COOLEST NEIGHBOURHOODS IN THE WORLD