Pictured: The amazing £1.3million pod homes that sit on pillars above water and in the treetops, featuring panoramic windows and landing pads for drone deliveries

Futuristic pod homes – called SeaPods – that sit 7.5ft (2.2m) above the water on a post anchored to the seabed are under construction in a factory in Linton Bay Marina, Panama.

The ‘aquatic living’ residences are priced from $295,000 (£252,261) to $1.5million (£1.3million) and come with ‘massive’ panoramic windows and landing pads for drone deliveries. Don’t fancy the idea of life on the ocean? You can live in one on the land too. 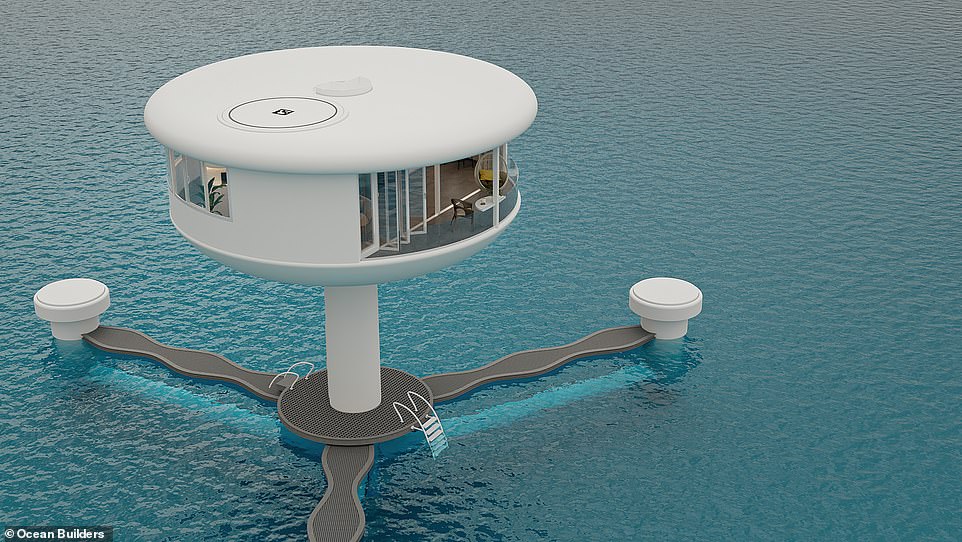 Futuristic pod homes (pictured in the above rendering) that sit 7.5ft above the water on a post that’s anchored to the seabed are under construction in Panama – and land-based pods are available too 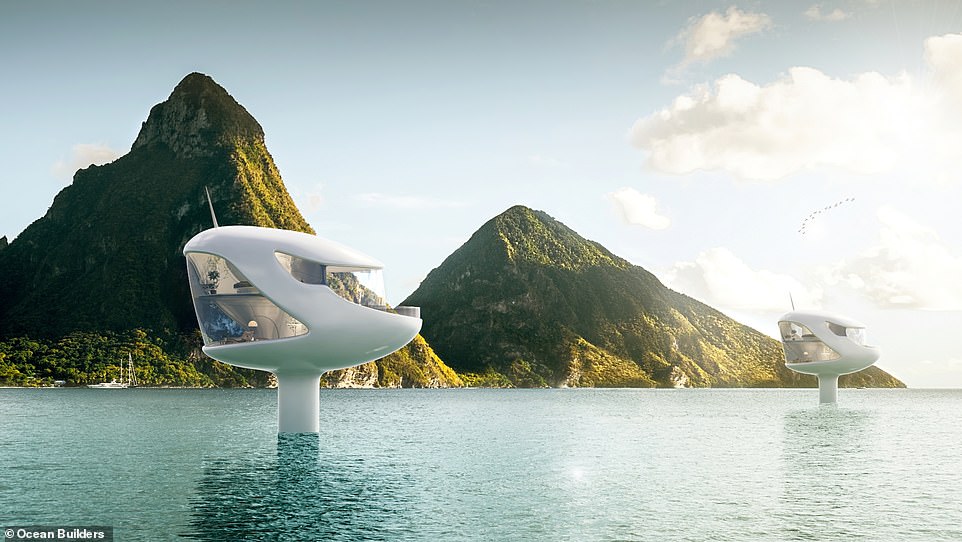 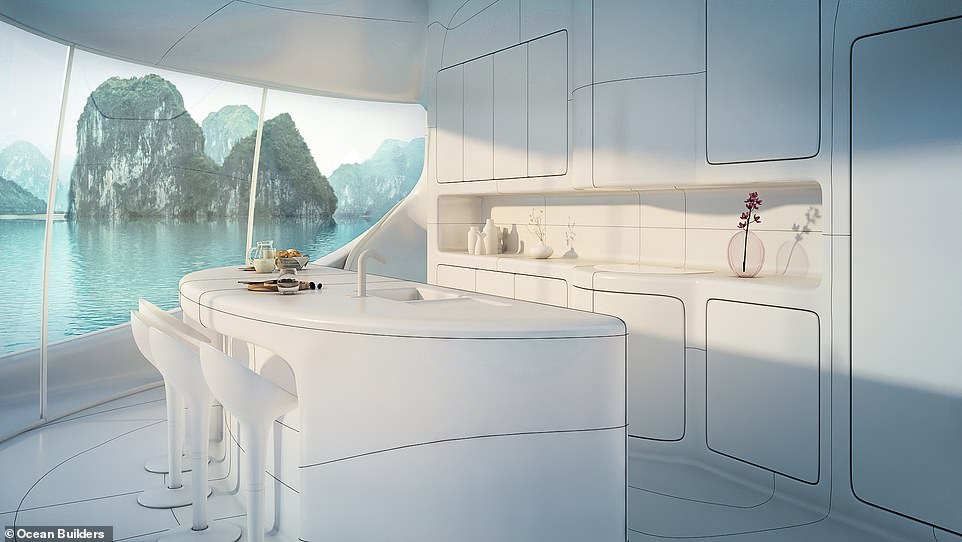 Above is a rendering of a SeaPod kitchen. The ‘aquatic living’ residences are equipped with ‘massive’ panoramic windows 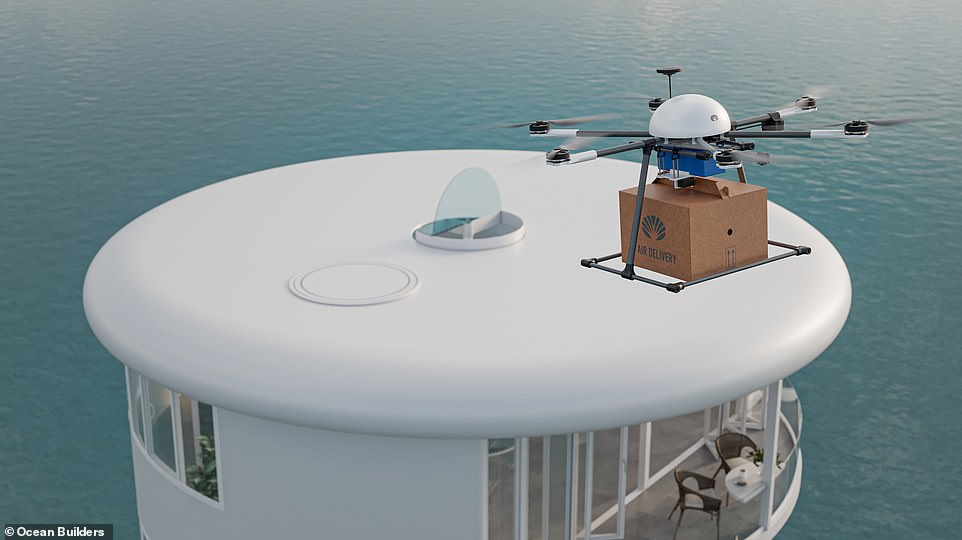 The land-based alternative is known as a ‘GreenPod’, and it’s said to be like a ‘futuristic treehouse’. A third ‘ecologically and economically friendly’ model for both land and sea, called the EcoPod, is also under construction.

Access to them is granted by a ‘smart ring’ that unlocks the front door, turns on the shower and adjusts the water temperature, plays music, and dims or brighten the lights.

The SeaPods, which will be positioned in the water by the marina, will be available for ‘overnight stays’ this December and are due to welcome owners in early 2023. While the GreenPod is currently under construction, it’s not yet clear where these pods will be erected on the land.

How do they work? With the SeaPod, the central pillar is attached to a platform at water level that extends around 3.2ft (one metre) underwater. This platform is anchored by large concrete blocks, which prevents the abode from moving around or spinning in the water. 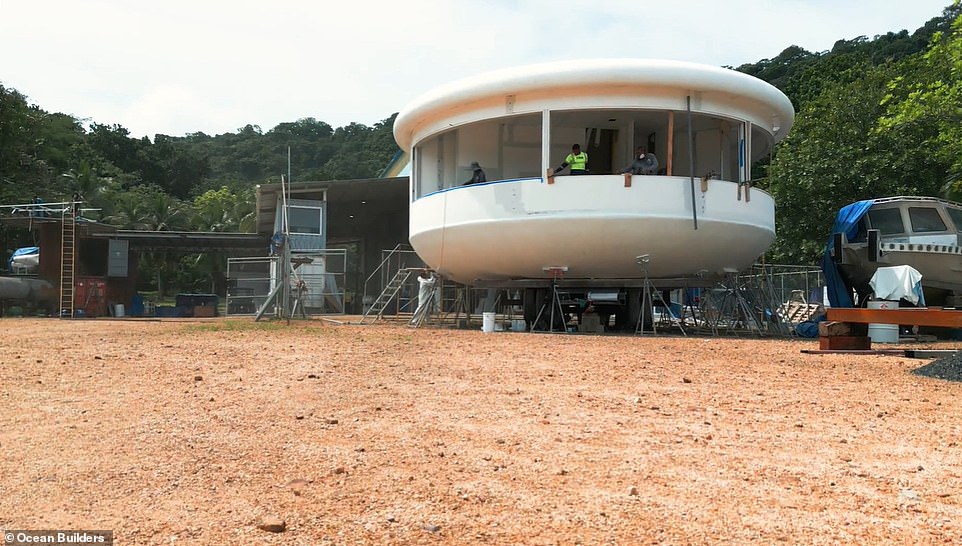 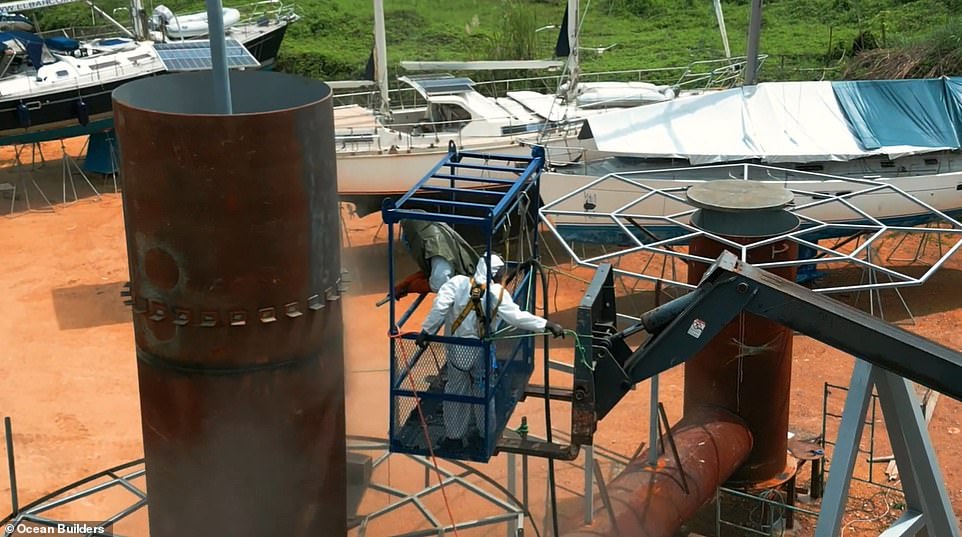 The central pillar (pictured) that supports the SeaPod is attached to a platform at water level that extends around 3.2ft (one metre) underwater 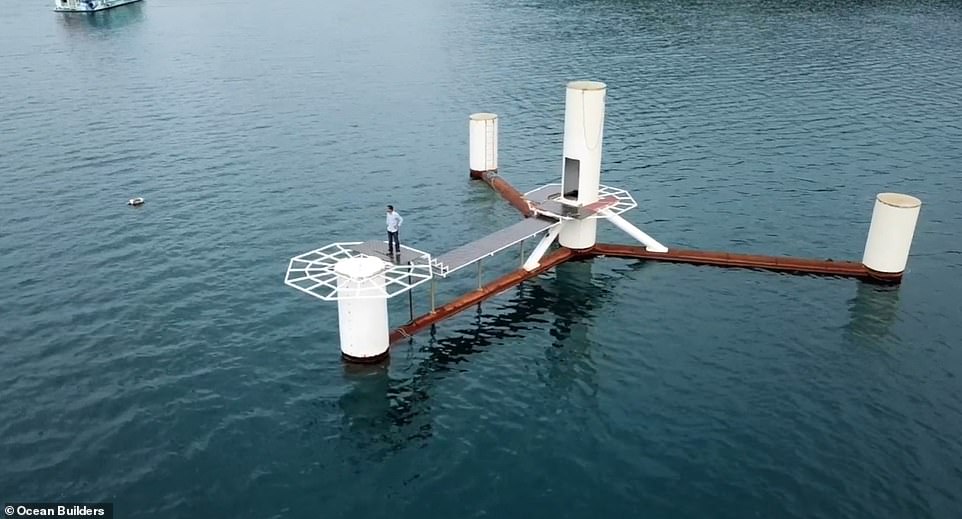 The SeaPods will be available for ‘overnight stays’ this December. Above is a base and platform prototype in the water

Ocean Builders, the Panama-based ocean innovation technology company behind the design, explains that the base beneath the pod is made of air-filled steel tubes, which create buoyancy. And underneath this are 3D-printed habitats to promote coral growth.

The base can also be a place for the owners to hang out – they can be customised to include a hot tub.

Residents enter the customisable pods via a spiral staircase inside the central pillar.

In the living quarters are windows with a ‘special UV tint’ that keeps the homes cool and offers privacy, and interior walls that ‘mimic the natural flow of water and curve seamlessly from one room to another just like water flows and curves’, says Ocean Builders.

The kitchen is said to feature ‘views so good you wonder how you lived without them for so long’, and the living room can be turned into a second bedroom, a gym, or an office. 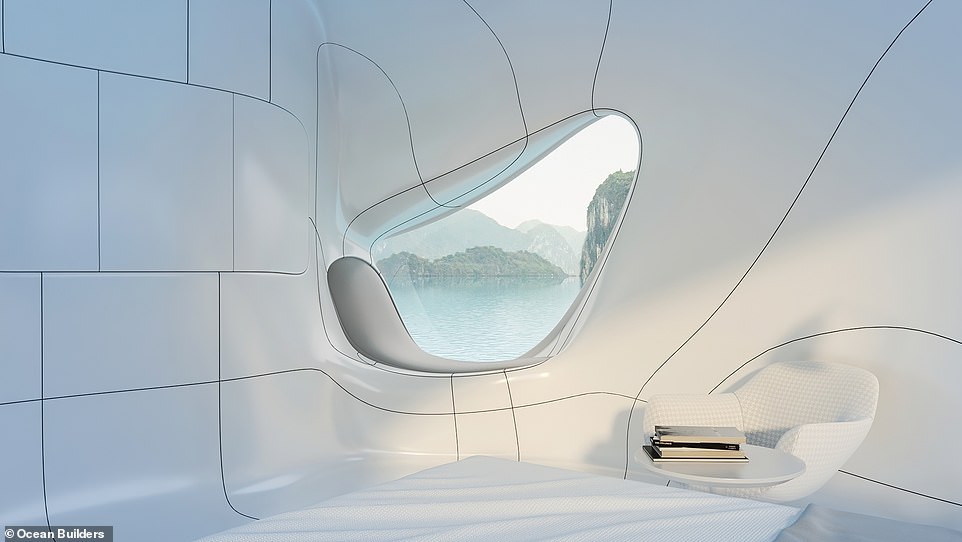 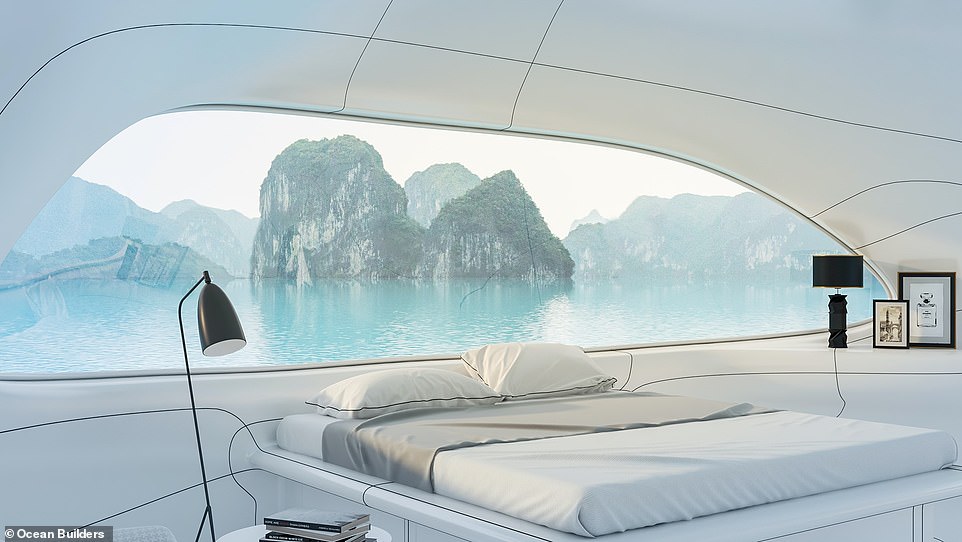 Above is the master bedroom. The pod’s windows have a ‘special UV tint’ that keeps the homes cool and offers privacy 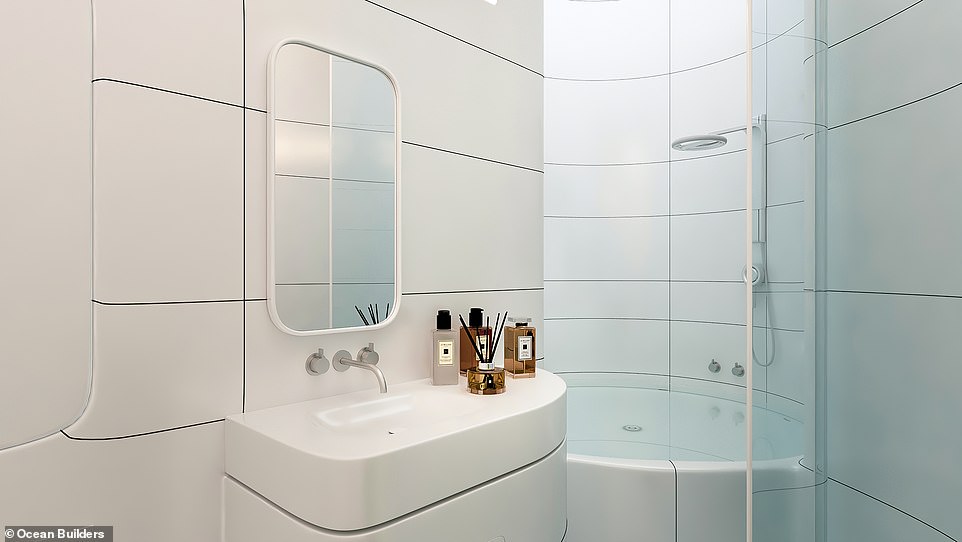 Moving on to the master bedroom, there residents will find ‘unparalleled panoramic views that may inspire [staying] in bed all day long’.

The bathroom can be upgraded to feature shower massage jets and a ‘massive’ 850-litre bathtub, while the wall of the shower is studded with climbing grips. Residents will need to use these to climb up the wall to the roof hatch – and out to the drone landing pad.

Delivery drones that have been ‘customized and perfected to withstand high winds and other overwater conditions’ can drop off groceries, clean laundry, medical supplies and general packages and can take recycling, rubbish and dirty clothes back to the Ocean Builders base on shore.

For packages that are too heavy to travel by drone, Astro ASV vehicles (meaning ‘autonomous surface transport and recycling operations’ and ‘autonomous surface vehicles’) can ferry larger deliveries such as luggage or furniture up to a weight of 200kg or 440lbs on the water. These vehicles will also collect rubbish and clean up the area around the pods. 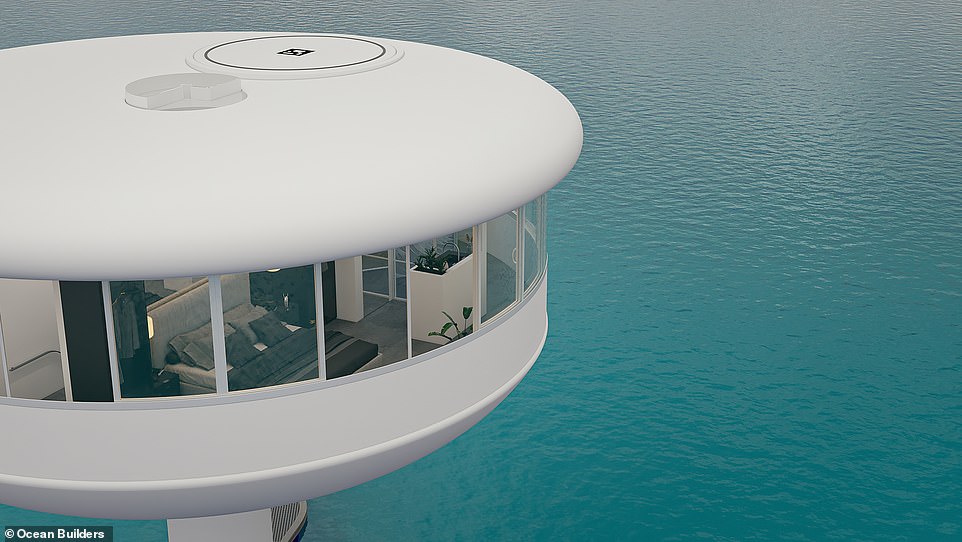 The EcoPod (above) is a single-storey design that can be ‘manufactured quickly, economically, and easily from anywhere in the world’ 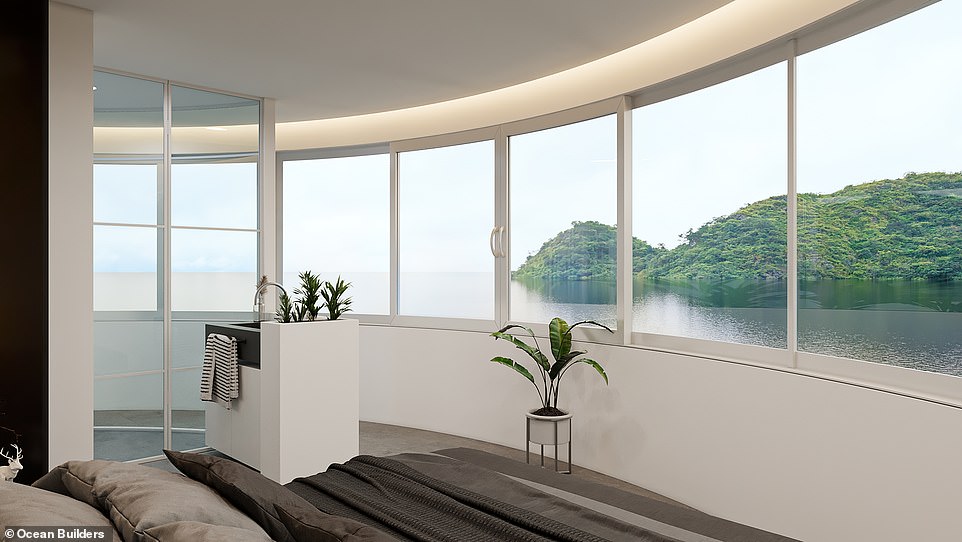 In the master bedroom, residents will find ‘unparalleled panoramic views that may inspire [staying] in bed all day long’ 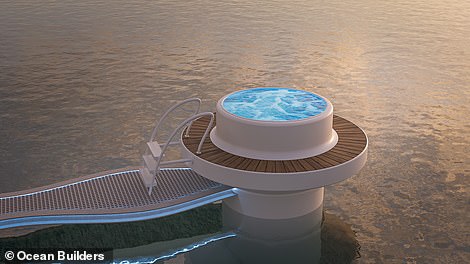 Hot Tubs are an optional extra

Residents of the pods can travel in the Astro ASV vehicles in the case of emergency, but generally, they will reach the pods via water taxi, jet ski or boat.

What happens if there’s a storm? Speaking on CNN last month, Ocean Builders CEO Grant Romundt explained: ‘We’re engineered for waves of up to five metres (16.4ft) and if we wanted to engineer for larger waves we could. We’re going to start a testing project next year in Florida where we’re going to try and engineer them for hurricane conditions.’

The GreenPod has near-identical dimensions and layout as the SeaPod, but the central pillar is placed in a hole in the ground. The company says that these pods can be ‘winterised’ so that homeowners ‘can enjoy all seasons’.

The EcoPod, meanwhile, is a single-storey design with ‘sexy curves on the outside’ that can be ‘manufactured quickly, economically, and easily from anywhere in the world’.

The pods, designed by Dutch architect Koen Olthuis and his design team at Waterstudio, are said to merge ‘architecture with art and futuristic design to capture the beauty and simplicity of an incredible lifestyle on the water’. 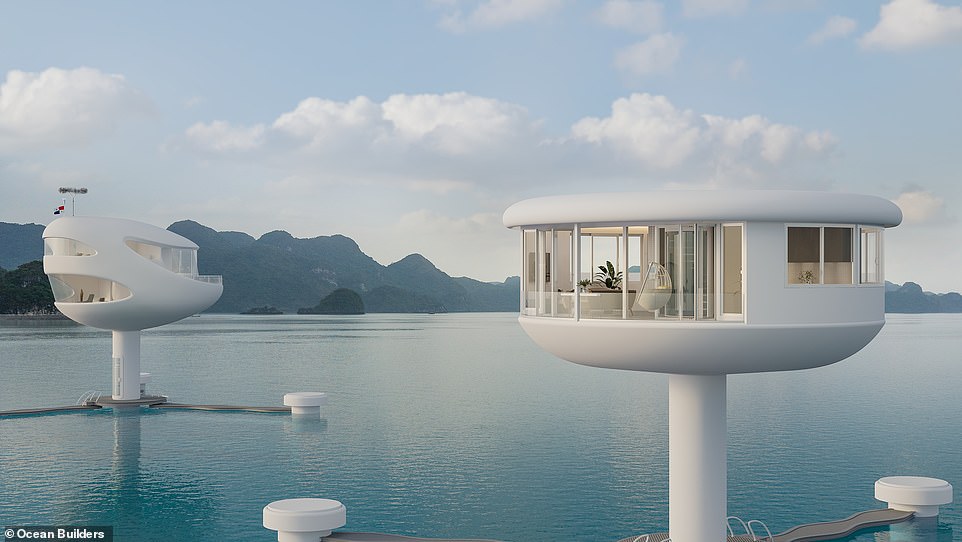 Above is a SeaPod (left) and an EcoPod (right) in the water. The pods are said to give residents the chance to ‘live among the waves without sacrificing the luxuries of modern living’ 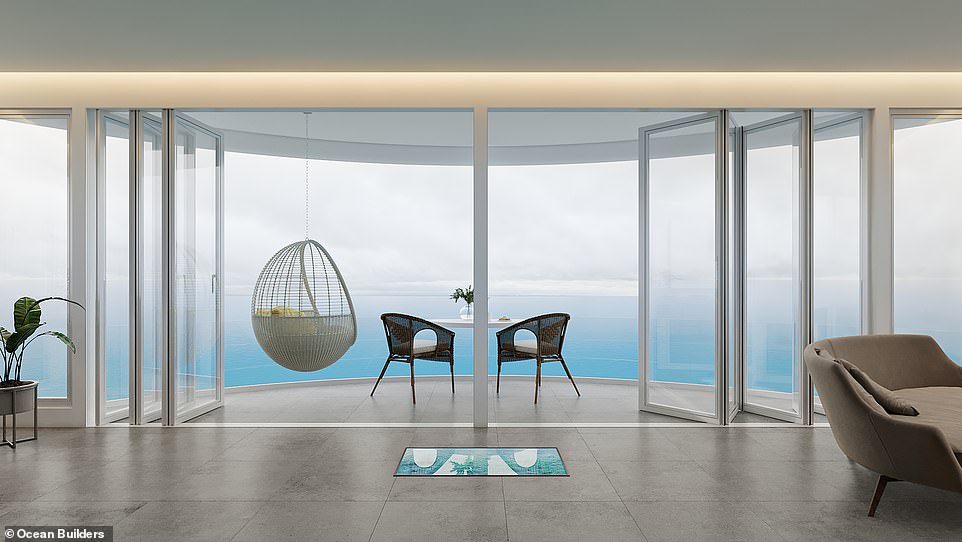 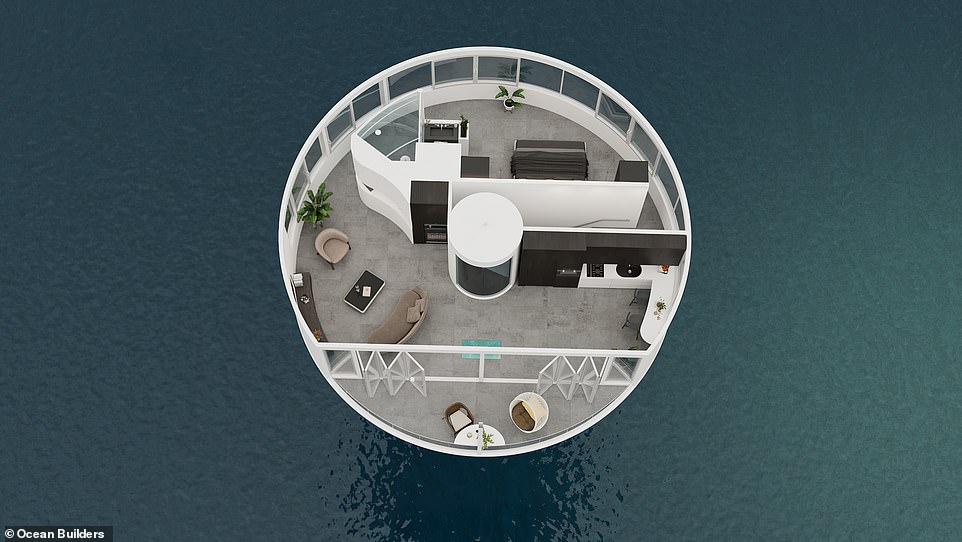 A bird’s eye view of the EcoPod. Access to the pods is granted by a ‘smart ring’ that unlocks the door, turns on the shower and more

Ocean Builders built an earlier model of the SeaPod off the coast of Thailand in 2019, but it caused a conflict with the Thai authorities. The company said that the design ‘was functional but not pretty’ and that it has ‘come a long way since then’.

Undeterred by its experience in Thailand, Ocean Builders is keen to build SeaPods in other locations around the world.

Ahead of the launch this month, CEO Grant Romundt said: ‘Every day thousands of people all over the world move closer to the top 15 major metropolitan cities, which are within 80km (50 miles) of a coastline – a trend that will continue to grow.

‘With our experience in ocean technology innovation, we knew we could offer a path forward for offshore infrastructure that is both restorative and sustainable. 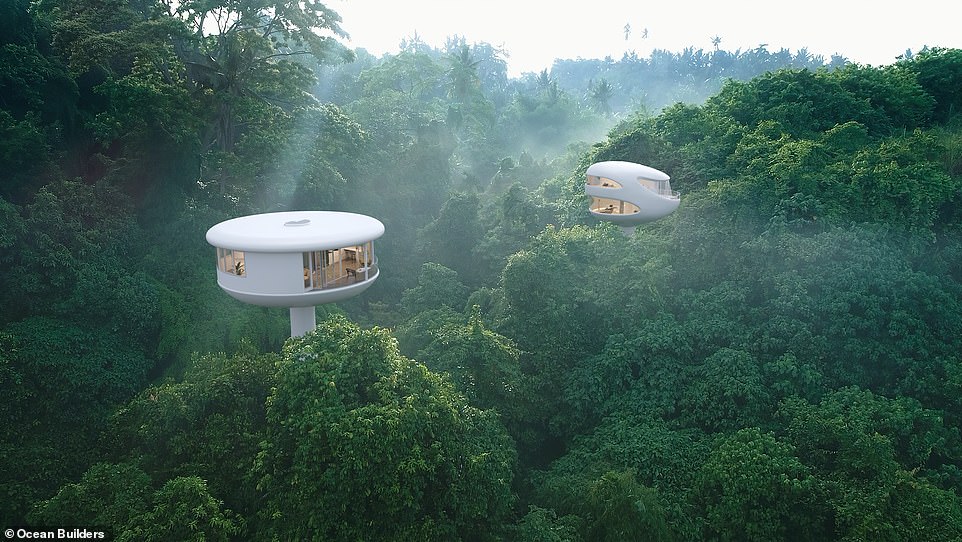 The land-based pod is known as a ‘GreenPod’, said to be like a ‘futuristic treehouse’ 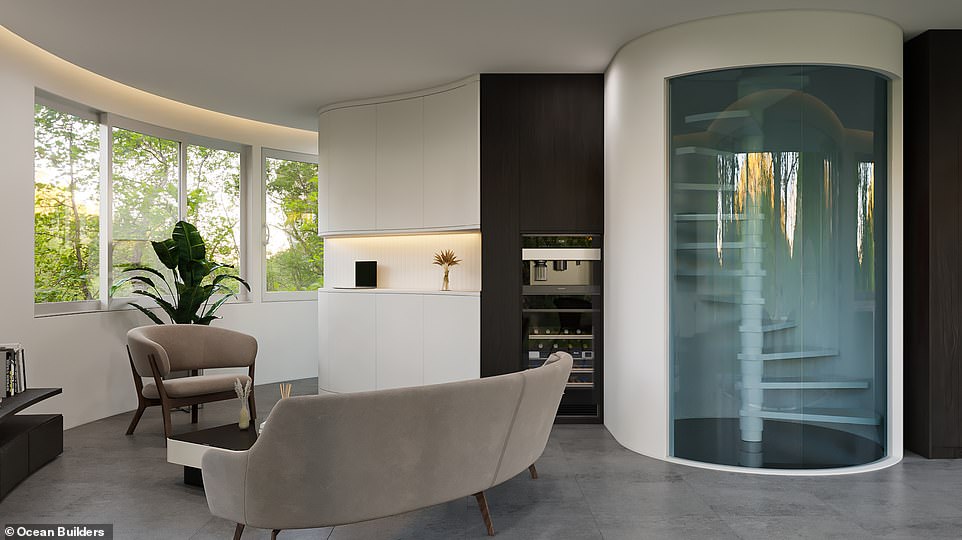 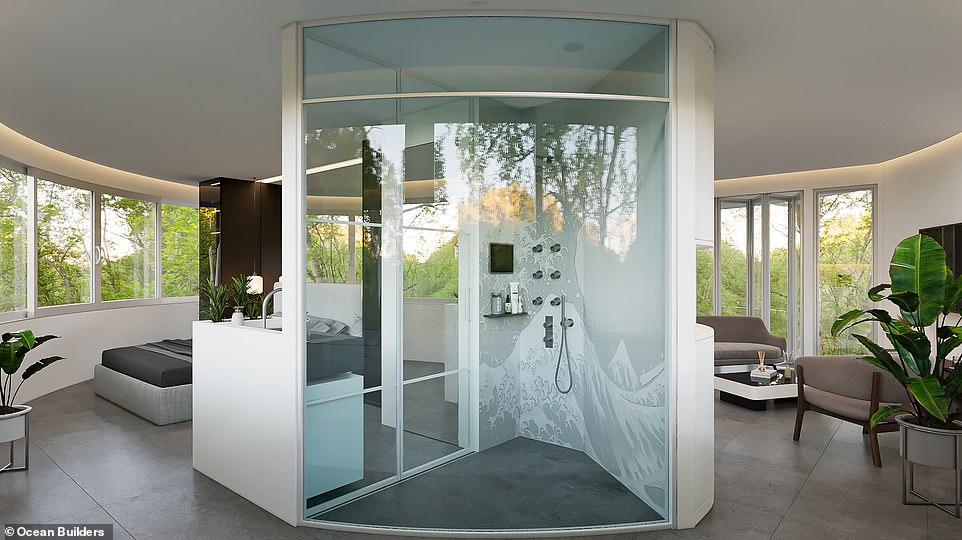 While the GreenPod is currently under construction, it’s not yet clear where these pods will be erected on the land

‘We’ve been motivated by the opportunity to change and challenge the traditional real estate and tourism models and create first-in-class living experiences that can give back to our ocean environment.’

He continued: ‘We no longer live in a world of impossibilities. We are sending people to space and childlike dreams are quickly becoming a reality. We are creating a new real estate asset class and luxury lifestyle that will redefine how and where we live while optimizing the health, safety, and sustainability of the environments that house the pods and the residents and guests that will ultimately occupy them.’

Ocean Builders says that it will have the first 100 fully owned custom Pods in production or delivered by the end of 2023. A second deployment of over 1,000 pods will begin in 2024, it adds. To reserve a SeaPod, prospective buyers can put down an £85 ($100) deposit on the Ocean Builders website.