Revealed: The UK’s favourite walks to blow away the cobwebs over the holidays, with the Buttermere Circuit in the Lake District ranked No.1

The Buttermere Circuit in the Lake District was named the UK’s top-rated walk in a survey of more than 50 popular routes, ranging from gentle strolls to full-day hikes.

The 4.5-mile lakeside route received a walk score of 88 per cent. It was awarded five stars for scenery, thanks to its combination of a rippling silver lake next to dramatic mountains.

Visitors also rated it favourably for accessibility, peace and quiet, and places of interest available on the route. 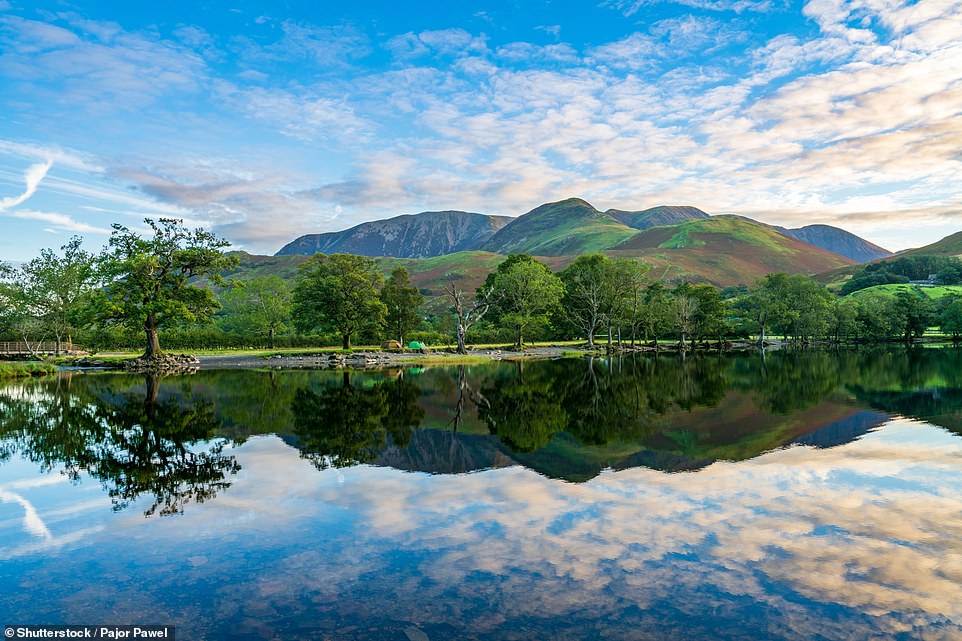 The Buttermere Circuit in the Lake District was named the UK’s top-rated walk in a survey of more than 50 popular routes. It takes in scenery including a rippling silver lake next to dramatic mountains, pictured 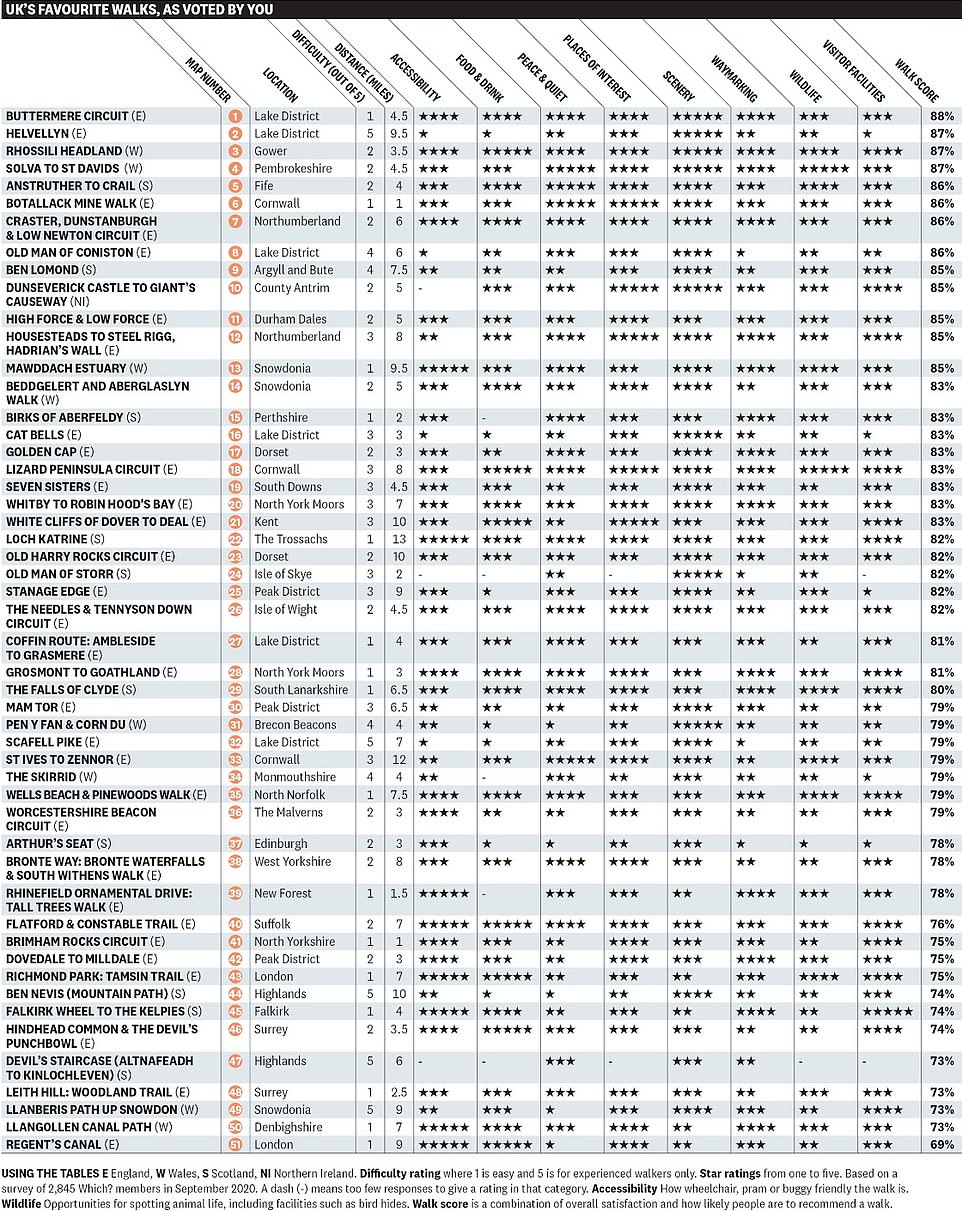 A table from Which? showing its ranking of more than 50 popular walking routes from around the UK 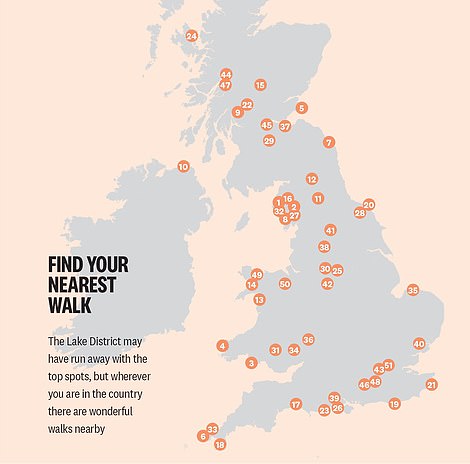 A map showing where the more than 50 popular walking routes are located. The numbers on the map correspond with the numbers in the table above

In the survey, a poll of 3,000 people commissioned by Which?, a tough eight-hour hike up Helvellyn, which at 3,116ft (950m) is the third-highest peak in the Lake District, came joint second.

It received a walk score of 87 per cent, with hikers giving it five stars for its stunning scenery and views from the Striding Edge Ridge.

While not one for the faint of heart – Which? recommends only experienced walkers tackle this route – the path is well-trodden and the chances of real danger are slim.

Which? gave this walk five out of five for difficulty though, and facilities along the route are limited to non-existent, so walkers should come prepared, it notes.

The Rhossili Headland in Gower and Solva to St Davids route in Pembrokeshire, both coastal walks in Wales, also received walk scores of 87 per cent.

These routes were both ranked two out of five for difficulty, making them both nice options for a pleasant but invigorating stroll, says Which?

The consumer champion recommends that those who enjoy a bite to eat or a drink as part of their walk should head to Rhossili, awarded five stars by visitors for food and drink, and adds that nature fans will be rewarded on the walk from Solva to St Davids, where they may even spot grey seals and porpoises – an indication as to why visitors gave it five stars for wildlife.

Receiving the third-highest score – and the accolade of Scotland’s best walk – was the Anstruther to Crail stretch of the Fife Coastal Path, with a score of 86 per cent.

A comfortable saunter between two fishing villages, this route was given five stars for peace and quiet and should only take a couple of hours to complete. The path is clearly waymarked too, allowing walkers to find their way easily while making the most of the views across the Firth of Forth, explains Which? 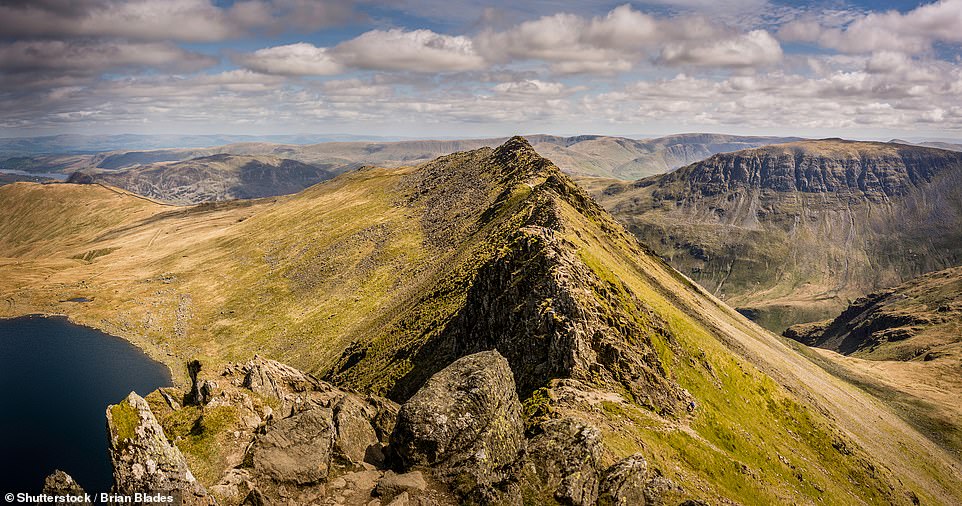 The tough eight-hour hike up Helvellyn – the third-highest peak in the Lake District – came joint second in the survey. Pictured is the view from the top of the peak, which stands at 3,116ft (950m) 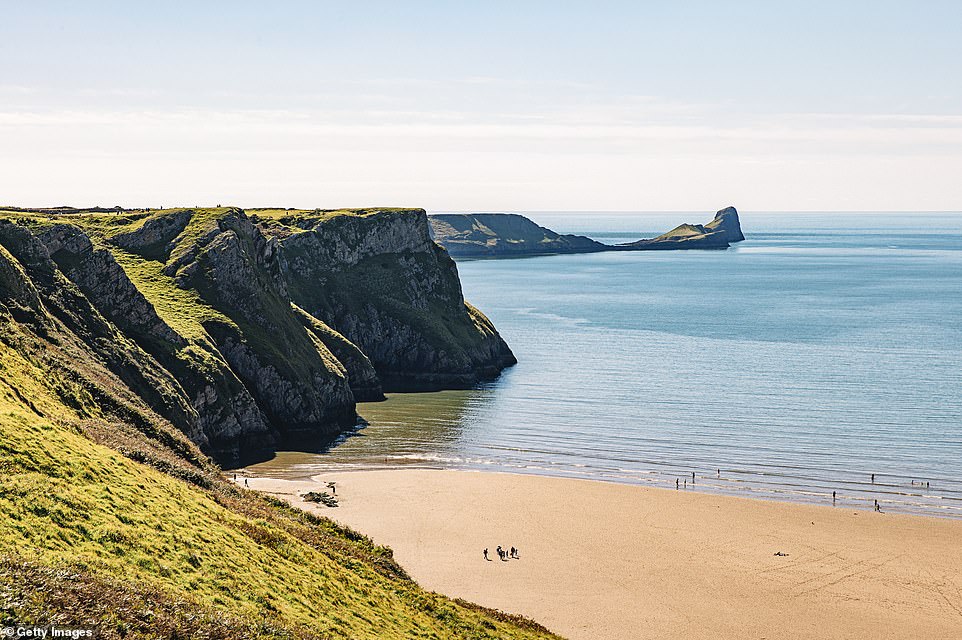 The coastal walk along the Rhossili Headland, pictured, in Gower, Wales, was joint second. Visitors awarded it five stars for food and drink 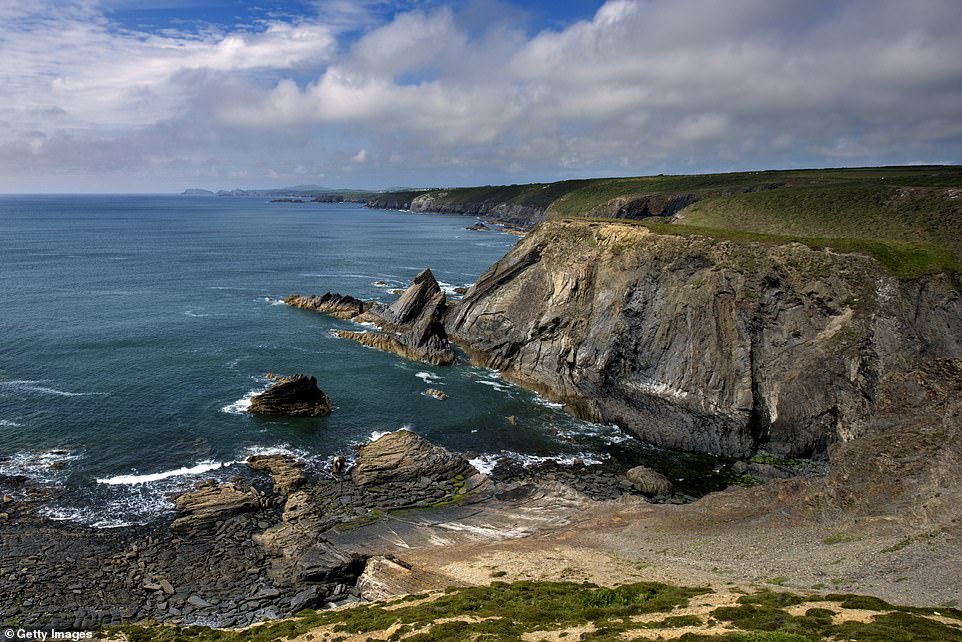 Part of the Pembrokeshire Coastal Path between Solva and St Davids, which came joint second in the survey. Here walkers may spot grey seals and porpoises

Other routes that received 86 per cent were the Botallack Mine Walk in Cornwall, the Craster, Dunstaburgh and Low Newton Circuit in Northumberland and the Old Man of Coniston in the Lake District.

Dunseverick Castle to the Giant’s Causeway was named Northern Ireland’s best walk, receiving a score of 85 per cent and five stars for both scenery and places of interest.

The five-mile route, including a descent down the 162 Shepherd’s Steps to take in the view of the 40,000 basalt columns at the end, is well-maintained and was rated two out of five for difficulty by Which?, with visitors also awarding it four stars for facilities along the way. 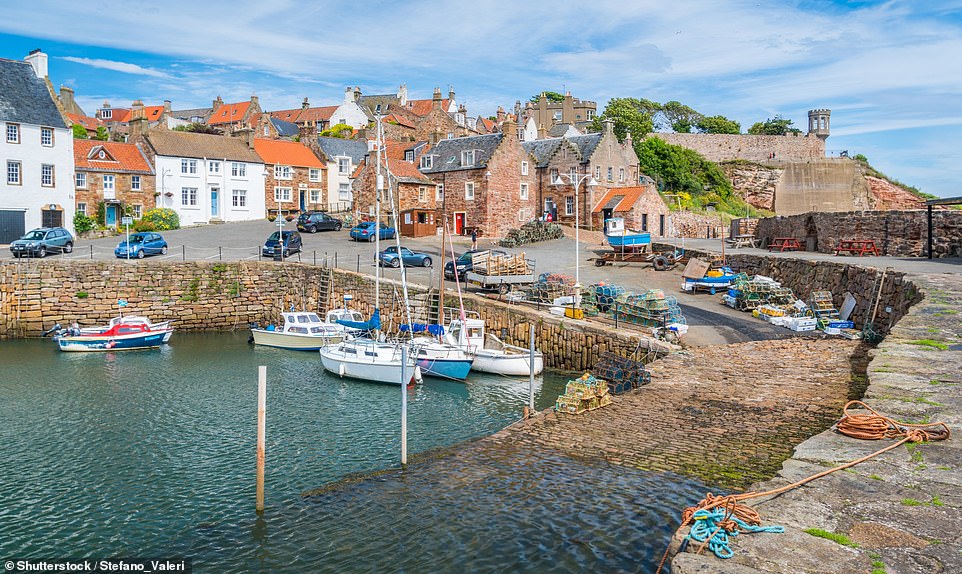 Receiving the third-highest score – and the accolade of Scotland’s best walk – was the Anstruther to Crail stretch of the Fife Coastal Path. Pictured is pretty Crail harbour 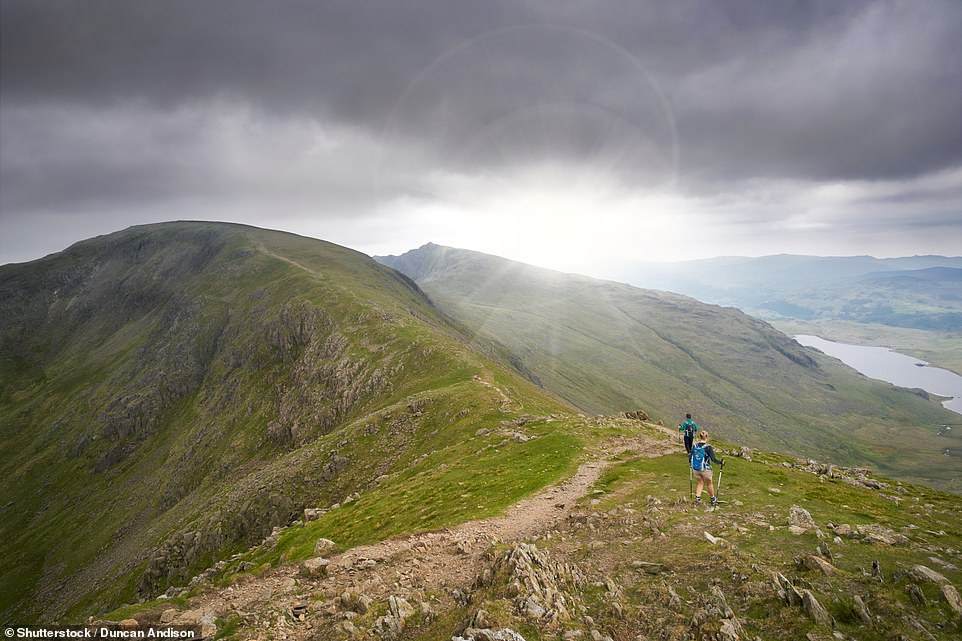 The route up Old Man of Coniston in the Lake District was joint third in the survey after earning a walk score of 86 per cent. Pictured are two walkers heading towards the summit at 2,632ft 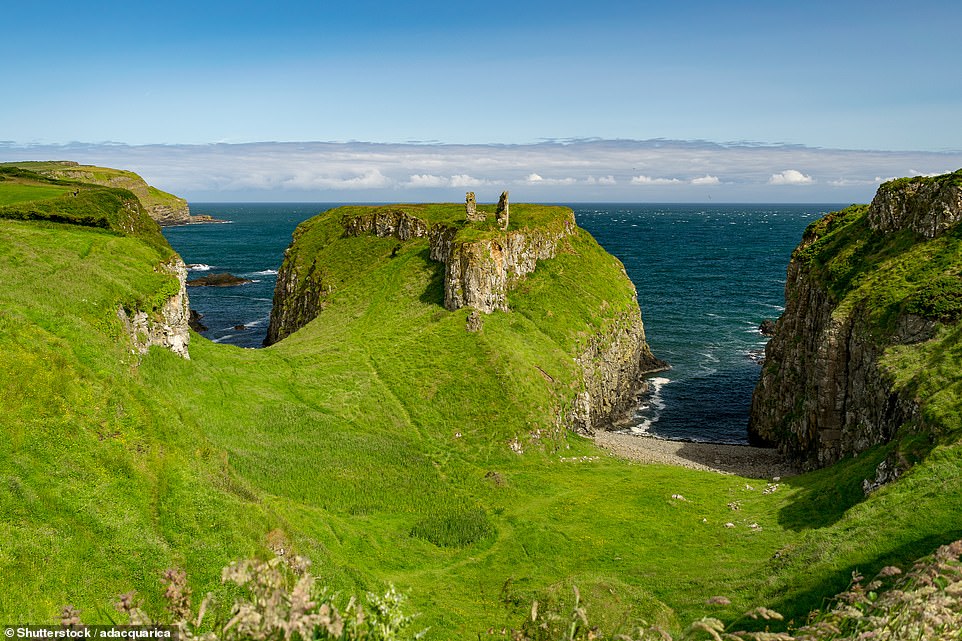 The route between Dunseverick Castle, pictured, and the Giant’s Causeway was named Northern Ireland’s best walk. It was awarded five stars for both scenery and places of interest

Ben Lomond in Scotland was also given a score of 85 per cent, along with High Force & Low Force in the Durham Dales, Housesteads to Steel Riggs along Hadrian’s Wall, and the Mawddach Estuary in Wales.

Rory Boland, editor of Which? Travel, said: ‘Whether you’re looking for easygoing strolls to fill the space between Christmas and the new year, or you’re after a breathtaking hike to help you shake the dust off your feet after this year, our rundown of the country’s favourite walks should provide plenty of inspiration.

‘While coronavirus restrictions might prevent us from travelling to some of the farther-flung destinations on our list, the good news is that we are truly spoiled for choice when it comes to stunning walks across the UK, meaning there are walks to be enjoyed wherever you are in the country.’