And yet, I had been thinking about the “agnello scottadito alla brace” for five long years. So when those four crusty juicy grilled lamb chops arrived, all oozing that deep chocolate sheen of perfectly cooked meat, I almost forgot where I was.

Where that was, though, was seated outdoors at Taverna Castelluccio, looking out at my favorite view of what is legitimately the most beautiful place on earth: the Piano Grande of Castelluccio di Norcia. This tiny hamlet perched on a high rock straddling the border of Umbria and Le Marche, overlooks central Italy’s vast and spectacular Great Plain, which, on this warm July afternoon, was in the middle of La Fioritura, the “flowering” of lentils that produces a massive rainbow carpet of red, blue, yellow and purple flowers.

It was a view I had missed, almost painfully. The coronavirus, of course, had made Castelluccio, like much of Italy, off-limits to American travelers in 2020 and much of 2021. But the village’s woes started before Covid: In August 2016, just one month after I had last been in Castelluccio, a string of earthquakes began a three-month tear through Central Italy, culminating in a big one that destroyed the town on October 30.

I emailed Guiseppe Caponecci, the owner of Taverna Castelluccio, the next day. “Are you OK? Is Castelluccio OK?”

His answer, seven hours later, seized my heart. “At the moment,” he wrote, “I have no words. Peppe.” 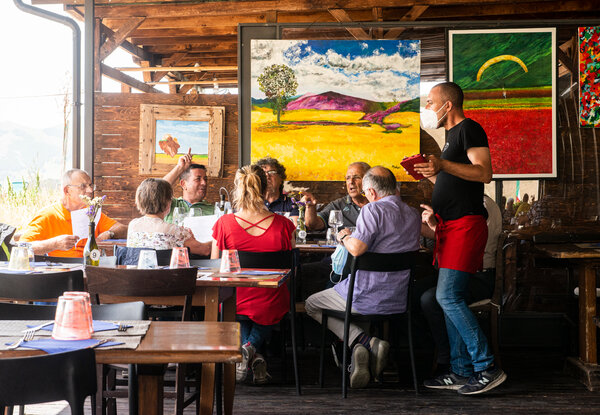 Peppe, like the other residents of Castelluccio, had been evacuated by Italian authorities after the earlier quakes. That proved prescient, as the big one destroyed the tiny village.

Stone work that had survived 1,000 years lay crushed. Homes and stores were flattened. The 16th century church of Santa Maria Assunta was severely damaged. Peppe’s Taverna Castelluccio, where, since 2010, I had enjoyed an obscene number of lamb chops and plates of pappardelle with wild boar ragu, was gone.

Castelluccio is still at the starting point of the road back. Local politics and bureaucratic delays have stalled rebuilding for five years now. Conflicting reports about whether the twisty white-knuckled switchback road from Norcia to Castelluccio, breathtaking for reasons that venture beyond scenery, had reopened post-earthquakes kept visitors — and me — away. But after a year of lockdown, when the only grand vista I saw was my postage-stamp backyard, my craving for Castelluccio was almost physical.

And you know what? The village is still alive and kicking. Other places may die as young people flee Italy’s remote, fortified towns that are rich in history but barren in jobs, but Castelluccio can’t be left to wither, even with its tiny year-round population of eight people — the number swells to a couple hundred in the summer — because of its spectacular Piano Grande.

In the summer of 2010, I had arrived at my friend Vittoria Iraci Borgia’s olive oil estate in the hills near Perugia for my annual weeklong vacation with, oh, 15 of my closest friends. Vittoria, whose 150-acre Agriturismo La Montagnola holiday farm boasts multiple swimming pools with gorgeous villas to rent, was showing my friends for the umpteenth time how to use the Wi-Fi when I interrupted: “Why haven’t you taken me to see Castelluccio?”

Her response was instantaneous. “Oh, Castelluccio is wonderful. How did you hear?”

Remember “L.A. Law,” that 1980s television show? Michael Tucker, the actor who played Stuart on the show, did what we all dream about doing and bought a villa in Italy with his TV and real wife, Jill Eikenberry. His delightful memoir, “Living in a Foreign Language,” includes an entire chapter on Castelluccio and the Piano Grande.

“No photographs, no book, no stories could have prepared us for the size and scope and beauty that spread out before us,” Stuart from “L.A. Law” wrote. “And, all the way over on the other side of the plain, perched on a hill like a trusty old watchdog, sat tiny, falling-down Castelluccio — population around 150 — as it’s been sitting there, housing shepherds and lentil farmers, for over a thousand years.”

I was immediately resolved. “Can we go on Thursday?” I asked Vittoria. I wanted the company and knew I couldn’t rely on my friends to wake up at 9 a.m. for a day trip; they were a nocturnal bunch.

That Thursday morning, Vittoria, her friend Nicole Keegan and I headed to Castelluccio for the day. It was hot when we left the estate, and we drove east through Umbria’s Valnerina, past tiny hill towns with no visible roads leading in or out. We headed into the Sibillini Mountains, named after the prophetess who hid in a cave to escape Christian persecution against pagans.

Leaving Norcia and beginning our ascent, the temperature dropped and the switchbacks started. We passed the Rifugio Perugia lodge and the landscape turned alpine. A pair of horses scampered on a hill near some sheep as cyclists huffed past. We rounded a final bend, and I yelled. “Stop the car!”

Vittoria was grinning, she had been expecting this. We pulled over and got out. “I don’t understand,” I kept saying.

We had arrived at the Piano Grande, the mouth of the extinct volcano that hosts Castelluccio. The mountains had opened up onto this vast, clear, bright plain, with colors that were piercingly sharp: the bright green of the grass and the mountainsides, the dark green of trees dotted along, including the Bosco Italia, a map of Italy –including Sicily and Sardinia! — made entirely of pine trees. And then, beyond the grass, the colors of the lentil flowers and poppies that blanketed the plain in an enormous living tapestry. We made our way toward Castelluccio, hanging like a sentry guarding her Piano Grande, past a riding stable where tourists were mounting horses to canter across the plain. Above us, two paragliders soared over the poppy and lentil fields. It had been around 90 degrees when we left home that morning, now it was around 72, crisp and beautifully clear.

My pal from “L.A. Law” had eaten at Taverna Castelluccio, so that’s where we headed, and where I met Peppe for the first time. He was used to dumbstruck people coming to his taverna, and we did not disappoint. We flirted with one of his waiters — who seemed fascinated by Vittoria’s insistence on ordering fish in the middle of this wild boar and lamb lovers’ paradise, but she can be contrary like that. We were all three giddy that day, taking hundreds of photos — of the waiter, with the waiter, of the plains, with the plains, of the trees in the shape of Italy, among the poppies, of ourselves scampering among the flowers.

Every year after that, Castelluccio was a staple of my summer vacation. We went by the carload, in convoys that paraded through the Valnerina. On the second trip, my friend Dusan discovered the wild boar ragu pappadelle at Taverna Castelluccio, and a lifetime love affair was born. In the third year, my friend Isabella discovered the grilled lamb chops, and I fully embraced the Italian tradition of “primi” and “secondi.” And, let’s not lie, “contorni” and “dolci.” Those lentils weren’t going to eat themselves.

When my nephew Cooper was 5 years old, we took him to Castelluccio. Being on the Piano Grande with a kid is something else. Cooper took off through the fields of poppies, running and jumping, chortling and dancing and doing all the things you want to do in a massive field of flowers but usually don’t. He ran all the way to La Chiesetta dell’Italia, the tiny church at the base of the Bosco Italia pine-tree map of Italy, and then ran back. He picked flowers and chased butterflies. He rode a pony. He wouldn’t cooperate with any photo shoots but I got the last laugh when I snapped a picture of him tearing toward me from the Bosco Italia, in full sprint. It has been the photo on my phone’s cover ever since.

The next year, in 2016, I hauled 40 people to Castelluccio to celebrate my birthday; six of them were Cooper’s age. Watching one kid playing in the Piano Grande is fun; watching seven of them puts a permanent grin on your face. Peppe, at Taverna Castelluccio, was a champ, especially after I emailed him beforehand what we all wanted to eat: nine pappardelle with wild boar, six penne alla norcina, seven strangozzi funghi e tartufo, nine agnello scottadito alla brace, four Bistecca maile in dolcezza, nine filetto di trota fario, gratinato al forno, and spaghetti with parmigiana for the kids. And, oh, two green salads.

That day, the sky, as it always is in early July in Castelluccio, was cloudless and vibrant. After lunch, my belly full, I sipped a last glass of trebbiano while sitting on the terrace of the taverna looking at the Pian Piccolo, the smaller plain on the other side of the village. My friends had scattered — some to stores in the village, some to hike up to the top, some to cavort on the colorful plains below. “You may have the universe,” Giuseppe Verdi wrote, “if I may have Italy.” Surely moments like these were what he meant.

Now, five years later to that day, we had finally come back, after the earthquake, the slow rebuild, the ongoing pandemic. We planned a group horseback ride and I had emailed Peppe weeks before, of course, to make our lunch reservation. The photos he had posted on Facebook over the past years had sustained me, after all.

A few days before we were supposed to drive to Castelluccio, a handful of people at the riding stables there tested positive for the coronavirus.

We canceled our ride, put on our masks and headed to Castelluccio anyway, making sure to stay outside. We were a much smaller travel party this time, only four of us. Cooper came.

Heading up the switchbacks from Norcia, the sight of the Rifugio Perugia lodge made us stop the car. The entrance was still flattened from the earthquake. We rounded the bend and the Piano Grande spread before us: the same open vastness, the same gorgeous blooms.

But the town. The old town was still there but it was a wrecked tumble of crushed rocks and flattened buildings. I had somehow thought that there would be construction scaffolding and repaired buildings. There was little of that.

What there was, were new temporary structures. There were trailers just beneath the destroyed old town, where vendors and hawkers sold salamis and coffees. There were tourists, just like before, winding their way by foot from the town to the Piano Grande. And there were lentil flowers — on the roofs of each trailer, where residents had planted them.

At Taverna Castelluccio — now in a trailer but still with a spectacular view — Peppe welcomed us with big hugs. He was busy this lunch hour, feeding hikers and paragliders and the usual dumbstruck first-time visitors. He made Cooper what he called barbecue beef tips, which the kid devoured like he had not been fed in days.

After lunch, we headed to the Piano Grande, straight to the Bosco Italia. I felt fantastic, not sad like I had feared. The lentil flowers planted on the trailer roofs, to me, said everything there was to say about the resilience of Castelluccio. I took out my camera and looked at my nephew, then at the pine tree map of Italy in the distance.

“Please?” I implored the tween.

This time, there wasn’t any eye-rolling or refusal. His stomach full of what he now says was his best meal of our entire trip, Cooper took off to the Bosco Italia at full speed, and then turned around and ran back, an approximation of his 5-year old self. Castelluccio had survived, and so would this memory.