I landed into the Islands of Tahiti feeling dazed and confused, but with a sense of accomplishment, after surviving the 48-hour-plus journey.

I had started the trip to this paradisiacal archipelago more than two days previous.

Getting to the Islands of Tahiti from the UK is no easy feat, but after exploring the place, it’s a journey well worth taking – and one I would be willing to do again.

From jungle-strewn mountains to remote white sand-fringed atolls, it’s easy to see why this remote spot on the map is a bucket list destination for many.

My trip started in London, where I took a 2-hour 30-minute Eurostar train ride from St Pancras International to Paris.

No flights were leaving to Tahiti that day, so I broke up the journey with a stay at the Hilton at Charles de Gaulle airport and ventured to the hipper CitizenM hotel over the road for dinner. The area surrounding this Parisian airport, like many airport locations, is a little void when it comes to wining and dining.

The next day I checked in for my flight to the islands of Tahiti with the national carrier, Air Tahiti Nui, which has been running since 1996. 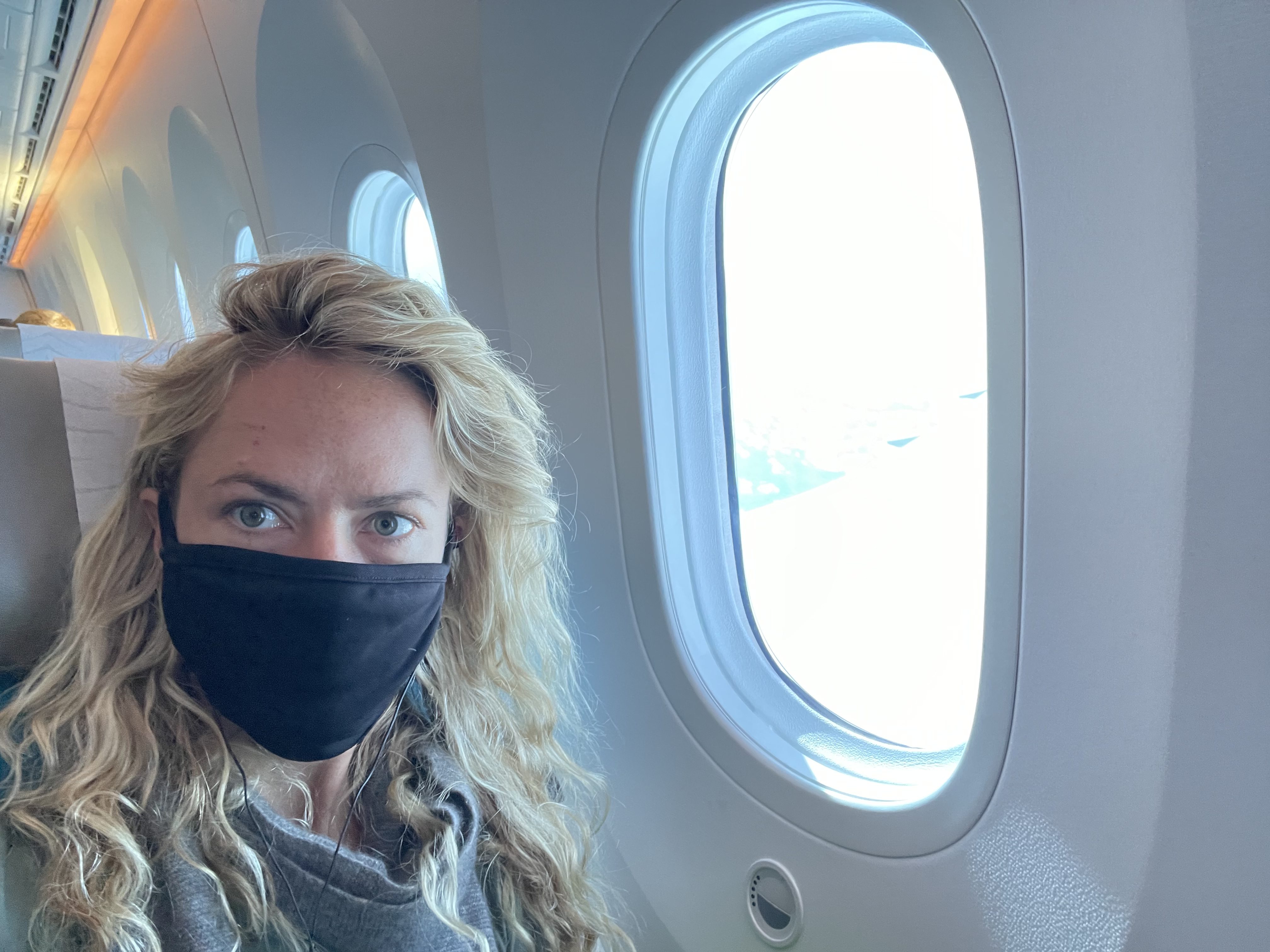 The airline’s flights traditionally go via Los Angeles, with a connection there, but due to Covid rules and regulations, our flight would go via Vancouver with a brief refuel there and then on to Pape’ete – the Tahitian capital.

On boarding my flight, the first thing that struck me was how jolly the air stewards’ uniforms were, with both men and women decked out in traditional prints and sweet-smelling tiare flowers behind their ears.

Another thing I noticed was the abundance of tattoos, which is something usually disliked by airlines, but in Tahiti, their intricate and meaningful inkings are something to be proud of.

I had a window seat in economy and luckily the middle seat was free, which meant I could spread out a little.

The seats on Air Tahiti Nui’s Boeing 787-9s are nice and spacious, with lagoon blue upholstery and lime, pink and yellow pillows for a sunny vibe.

The touch screen entertainment systems are easy to operate, although, for such a long flight, I was disappointed to find there were only ten new movie releases; with three of these in French and one a children’s film.

On the food front, we were served two meals on each leg of the journey, from Paris to Vancouver and then on to Pape’ete. Each leg totalled around nine hours.

For the trip, I had requested vegetarian food but this seemed to cause confusion so I made do with ‘poulet’ (chicken), ‘boeuf’ (beef) and ‘saumon’ (salmon) instead as I’m not a staunch non-meat eater. But be warned if you’re veggie or vegan… and perhaps double check your request has been acknowledged.

After visiting the Islands of Tahiti – an overseas collectivity of France – I learned that being vegetarian isn’t very popular so it made sense that the airline staff weren’t too hot on catering to my dietary request.

Some of the morsels I tried during the journey included a salmon dish with a good stack of green beans, a grilled vegetable salad, a creamy mushroom pasta and a moreish chunk of cheesecake.

It was actually some of the best economy flight food I’d had in a while and the drink selection also included wine, bubbles and spirits.

While the economy experience hadn’t been bad, for the return leg I was upgraded to ‘Moana’ Premium Economy – the only class above this on Air Tahiti Nui is ‘Poerava’ Business. This dedicated premium cabin features 32 seats configured in five rows on a seven-abreast (2-3-2) arrangement.

Given that it was a night flight, I was keen to get a bit of sleep ahead of landing into Paris and on to the UK two days later.

Upgrading to premium on Air Tahiti Nui is highly recommended, as you gain a significant amount of legroom, armchair-like seats with a width of 20.4 inches, proper crockery and plug sockets are available for charging devices.

You also score to checked bags up to 23kg in premium economy.

On both legs of the journey I managed to pack in a good amount of sleep, with some brief interludes to have a bite and watch the 1993 thriller The Fugitive, given that I’d exhausted the other film options.

It’s just the jetlag that I had to grapple with. Tahiti is 10 hours behind the UK in winter and 11 hours in summer.

To lessen the symptoms I would definitely recommend breaking up your flight with a layover in Los Angeles or another location, depending on where you’re travelling from.

Travel tips for an Islands of Tahiti adventure

Sadie travelled to the Islands of Tahiti as a guest of Air Tahiti Nui and Tahiti Tourisme. To book a flight with Air Tahiti Nui visit their website or call +44 (0) 844 482 1675. Flights from Europe to Pape’ete are now running via Los Angeles again with a change in border regulations.

Start your journey on the island of Tahiti with recommended hotels including Le Tahiti by Pearl Resorts for its secluded beachfront location and Manava Tahiti Resort for its proximity to the airport and spacious apartment-like rooms.

Take a 20-minute ferry ride to visit the peaceful island of Moorea, where you can go quad biking or jet skiing with Moorea Activities Centre or for something a little more sedate, check into the dreamy surrounds of the Sofitel, complete with overwater villas and a spa.

If you have time, be sure to book a flight with Air Tahiti over to Rangiroa, which is the world’s second-largest atoll. The romantic and calm surrounds of the Kia Ora hotel promise to leave a lasting impression and some of the activity options include exploring desert islands, diving with sharks, visiting a pearl farm, cycling and watching traditional Polynesian dancing at a weekly themed evening.