Not an all-inclusive fan? Inside a swish new feature-packed and family-friendly Club Med resort in Marbella that will convert you (especially if you’re an exhausted parent)

If you’re not an all-inclusive kind of person, I’ll let you into a secret… nor was I until I had children.

Now, with a busy job and two young kids, I’m a total convert – and resorts such as Club Med Magna Marbella are the reason. It makes for the perfect family holiday.

Nestled at the foot of the Sierra Blanca Mountains, this swanky new resort provides a fun-packed break with a dollop of luxury, delicious food and more activities – for young and older – than you could possibly fit into your day. There is so much to do that there’s no need to venture into Marbella town unless you desperately want to (we didn’t). 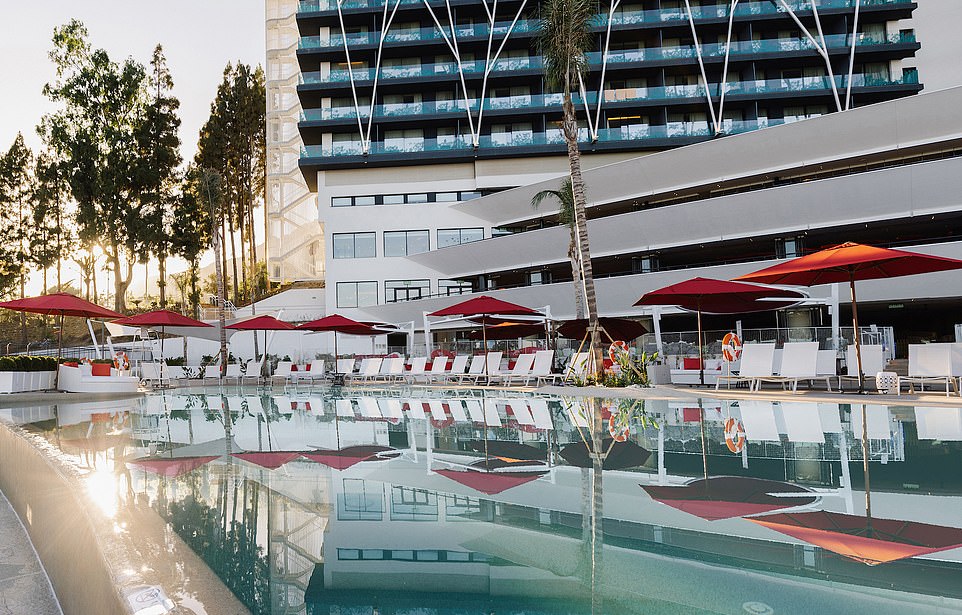 Dan Sanderson and his family checked in to the recently opened Club Med Magna Marbella, where around half the rooms have views of the Mediterranean 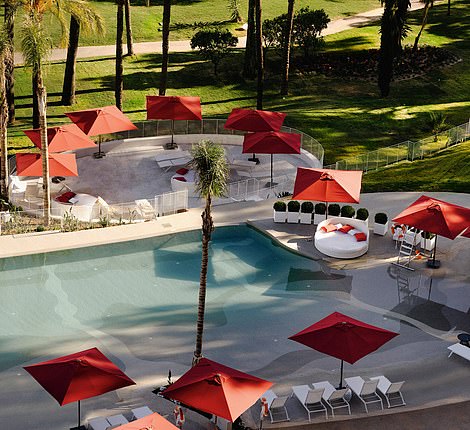 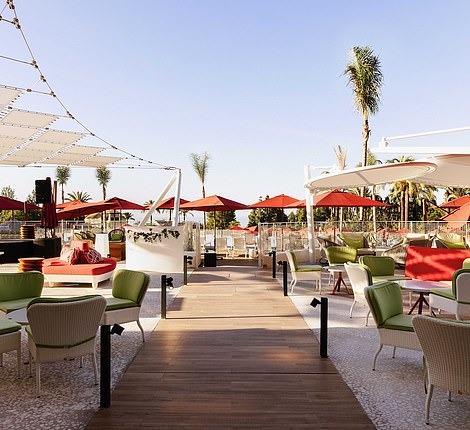 The resort boasts 14 hectares of ‘lush garden’, five swimming pools including a family waterpark, and an adult-only Zen Zone. There is also a spa, two restaurants – Suenos, and the Tierra Gourmet Lounge – and three bars

From the moment you get up, to midnight and beyond there’s never a dull moment. And because it’s brand spanking new, everything feels fresh and sparkly.

The resort boasts 486 rooms – half of them with views of the Med – 14 hectares of ‘lush garden’, five swimming pools including a family waterpark, an adult-only Zen Zone, a spa, two restaurants – Suenos, and the Tierra Gourmet Lounge – and three bars.

Plus, there are 10 tennis courts, a decent-size gym, outdoor group workout areas, a children’s playground, an archery range, mini-golf, several shops, an outdoor stage that hosts evening shows and even circus and trapeze rigs for both adults and children. 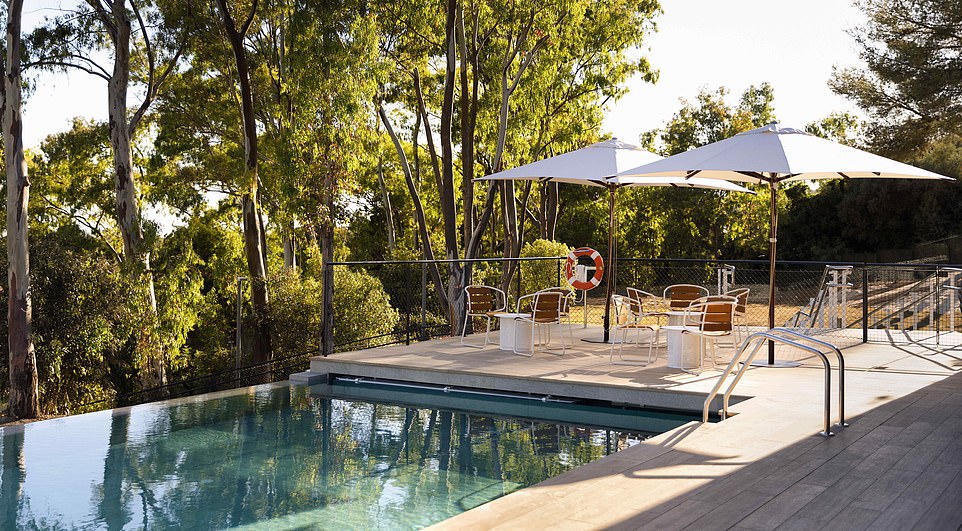 ‘From the moment you get up, to midnight and beyond there’s never a dull moment. And because it’s brand spanking new, everything feels fresh and sparkly,’ writes Dan 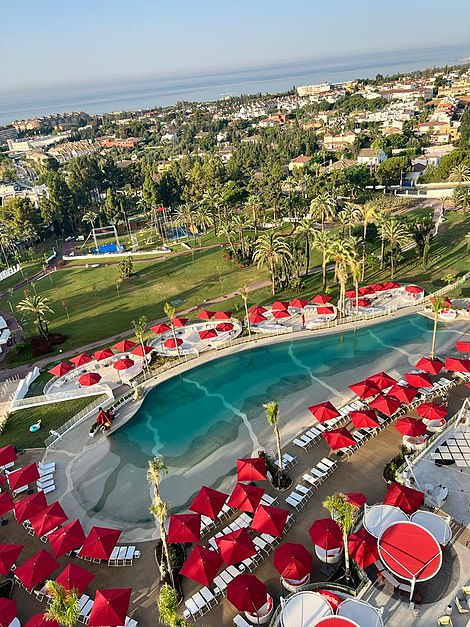 The focus here is firmly on children having the time of their lives – and the world-class facilities staffed by the brilliant ‘Mini Club’ team ensure that little ones can be entertained while adults relax, or not…

You only have to see the attire of most guests at the unfailingly impressive buffet breakfast to know that the majority of people start their day with some sort of sporting activity.

Being dressed in board shorts or a kaftan is not the norm in the mornings. Instead, tennis skirts, running shorts or expensive yoga gear is much more common.

The predominately French clientele (the exceptionally polite and enthusiastic staff will assume you are French until you tell them otherwise when their impressive English skills kick in) hit the tennis courts, despite the tremendous heat, with the type of enthusiasm that should be reserved for Wimbledon.

And if they’re not playing tennis there’s the morning run club, which my wife Claire and I watched from our balcony, coffee in hand, pretending to each other that we were going to give it a go the following morning. It transpires the lure of a breakfast banquet and a shaded sun lounger was too strong.

If running is not your thing, there’s Float Fit, a rectangular-shaped board about the size of a surfboard, which is tethered to the side of the pool, on which you attempt a mixture of yoga and functional moves – think standing on one leg, squats, high knees, and burpees.

Yes, you read right, high knees and burpees on a floating board. Claire, who is normally very active, struggled to stand up on two legs let alone do the more ambitious moves. 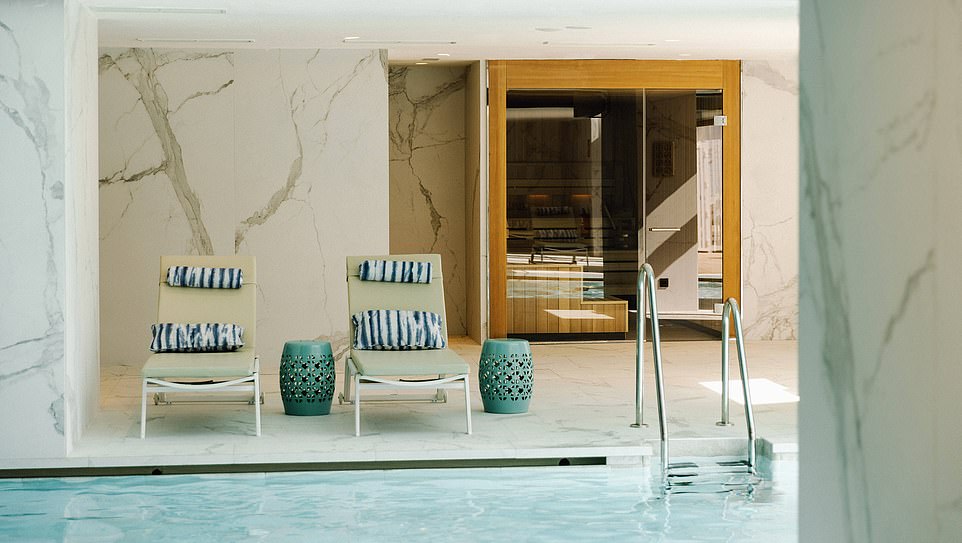 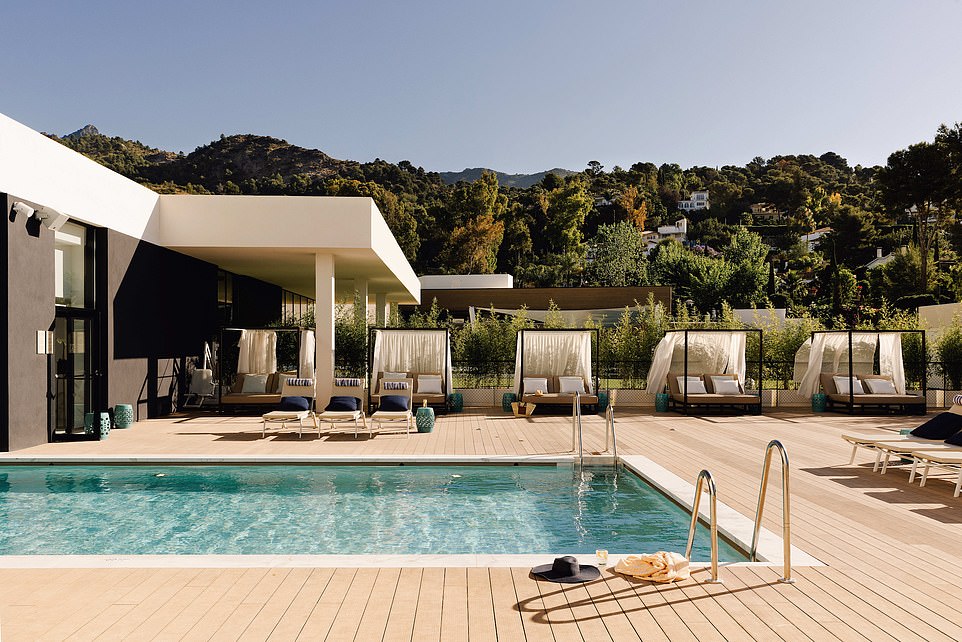 Dan reveals that he would watch the morning run club from the comfort of his room, coffee in hand

She fell into the water at least every 30 seconds, much to the audible frustration of the bronzed Adonis on the board next to her, who was being thrown off balance by the waves she was creating.

At 11am each day most of the women and some men around pool do aqua aerobics.

And if you’ve still got some energy left there are volleyball and football tournaments taking place, group and individual tennis lessons, fitness classes, yoga and aerial yoga and circus-skills classes.

If all that sounds like too much hard work (it did to us) the main family pool, situated alongside the hotel’s biggest bar, is a lively, fun environment to while away your day.

But head to Zen Pool if you’re looking for some quiet time because the family pool is all loud music and a hive of activity. It’s here we first witnessed Crazy Signs and came to realise that it’s a Club Med obsession. 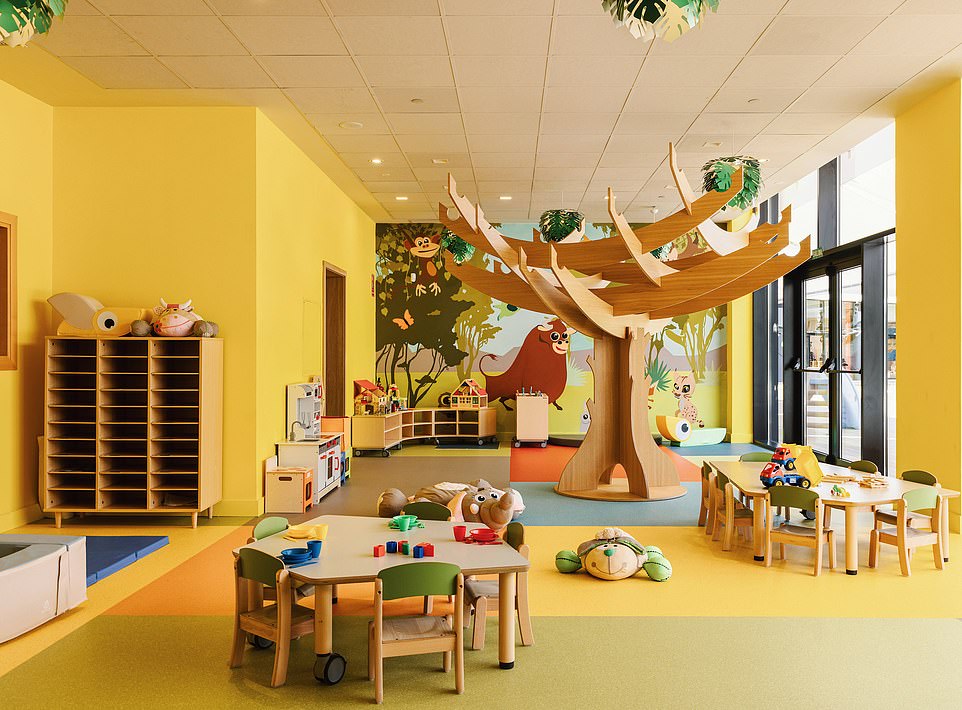 The ‘Mini Club’ for children is a real plus for kids and parents, reveals Dan 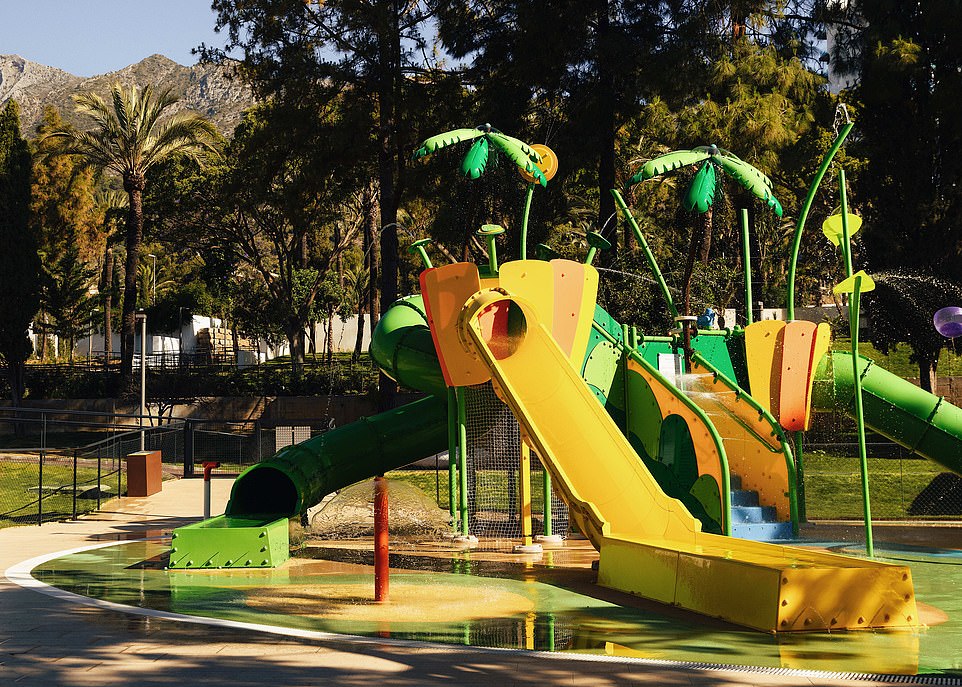 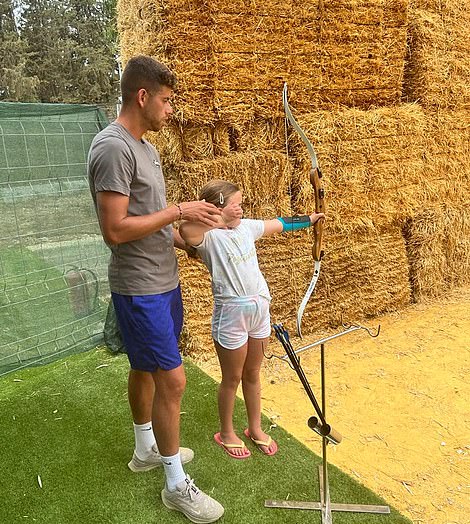 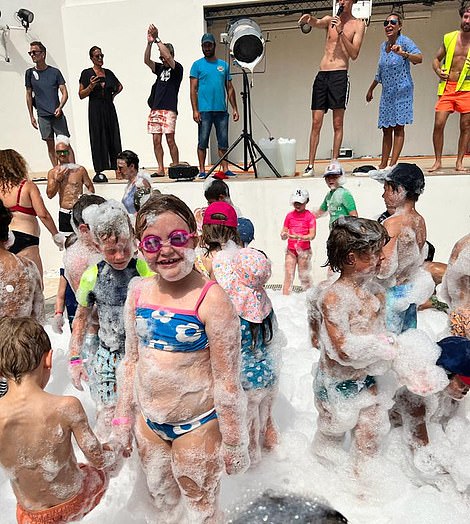 Pictured left is Dan’s daughter Nell at the resort’s archery range. On the right, enjoying an exciting disco foam party 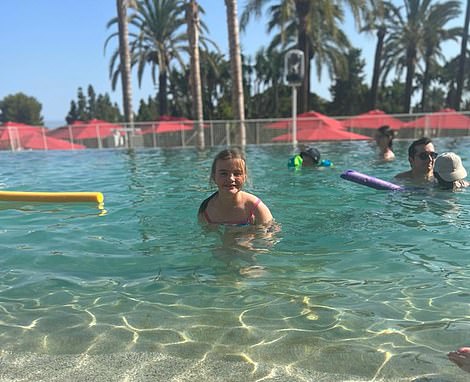 Dan’s daughter Nell loved the Magna Marbella ‘Mini Club’, which ran an activity session in a cordoned-off section of the splash pool (above)

Crazy Signs is simple – just follow along with dances led by the staff. There are even YouTube channels dedicated to it.

At midday sharp each day, seven or so staff would come to the pool, the dance music would be pumped up, and the compere would encourage everyone to get off their sun loungers and join in. There’s no room for self-consciousness at Club Med.

Multiple generations of the same family would spring up and diligently follow along, throwing themselves into the ridiculousness of it all with wild enthusiasm. And they all seemed to know all the moves.

We pushed aside our awkward ‘Britishness’ and fully embraced the Club Med experience. By day three we were joining in singing ‘Put your hands in the air, ole, ole, ole’ while busting out our best moves like Club Med veterans. 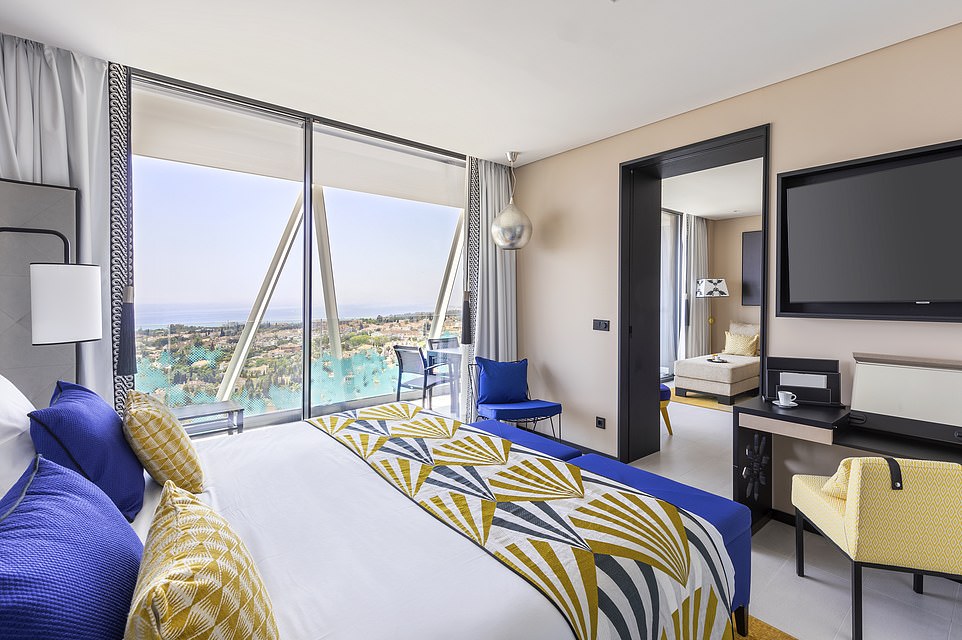 Dan says that Club Med Magna Marbella is ‘pure, unadulterated, good old-fashioned fun’. Above is one of the 486 rooms 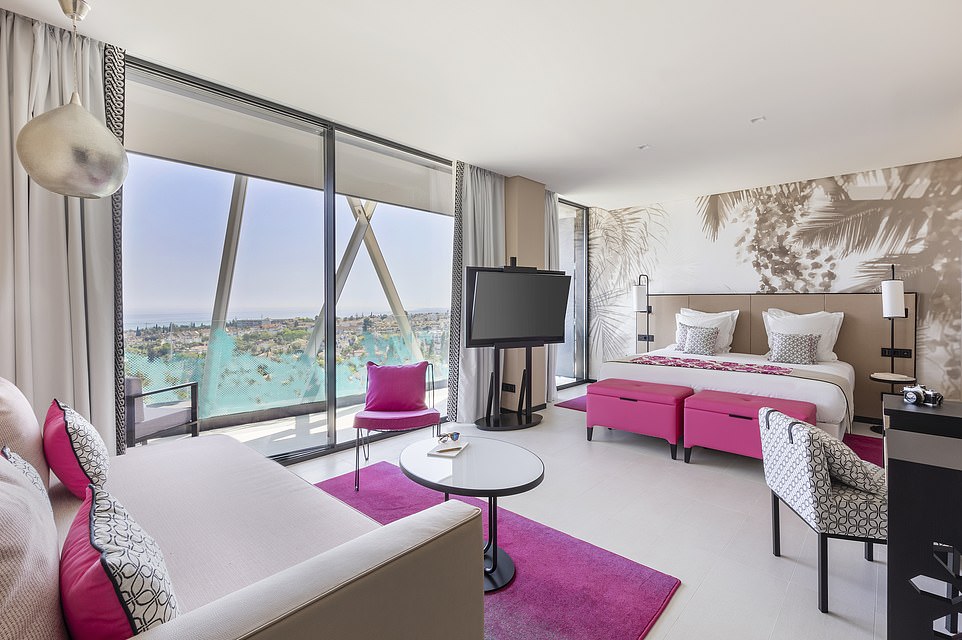 The resort ‘comes alive after dark’, says Dan, with choreographed dance productions on the main stage, ‘brilliant’ live bands, a flamenco band and a nightly disco that goes on until midnight ‘and beyond’ 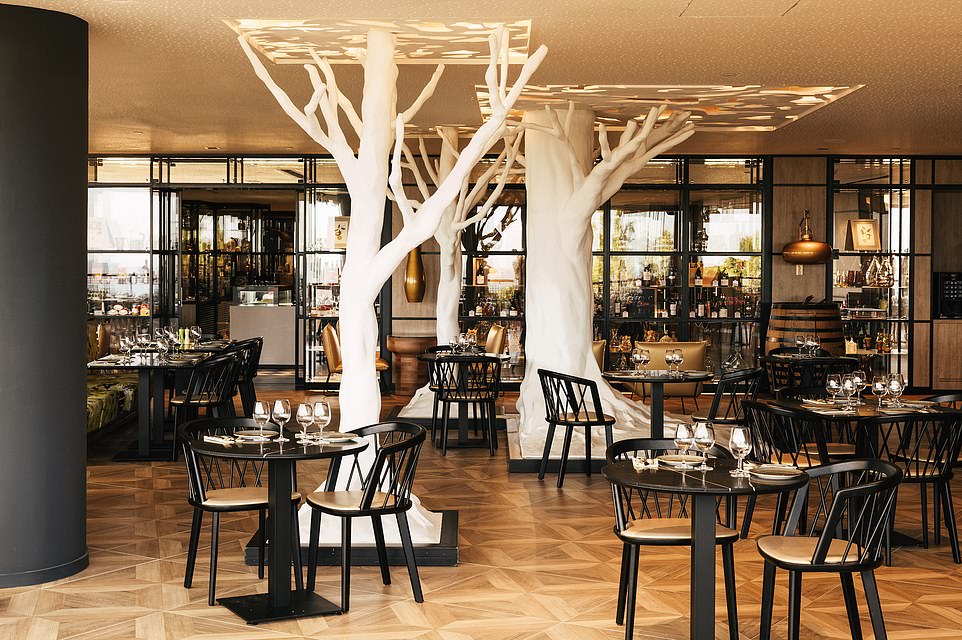 Dan describes the food offering as ‘delicious’. Above is the Tierra Gourmet Lounge, one of two on-site restaurants 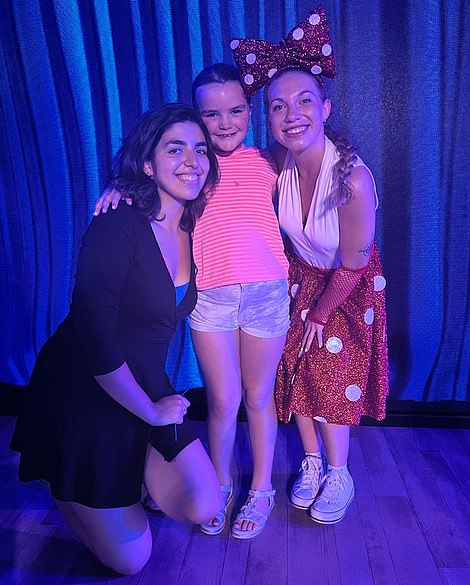 The Mini Club included a show that the children practised all week and performed for the parents. The Sandersons’ daughter Nell (pictured) had such a bond with the staff she was in tears on departure day

The kids club, meanwhile – called Mini Club – is seriously impressive. With its vast outdoor area, a cordoned-off splash pool and plenty of cool indoor space, the staff seemed to love their jobs and knew all the children by first name after the first meeting. You’d often see a parade of youngsters walking behind their club leader, chanting various phrases, heading to different areas of the resort throughout the day.

The activities were varied – our daughter Nell, six, even learnt trapeze – plus they had an inflatables afternoon, a foam party, a mini-Olympics and even a Mini Club show that the children practised all week and performed for the parents on the Thursday night.

The fact that there were very few English-speaking children meant ours had an immersive French experience. As great as that is, it also meant we couldn’t leave them there all day every day, or risk them feeling a little isolated. Nevertheless, Nell had such a bond with the Mini Club staff she was in tears on departure day.

You’d think that, with all this activity going on, guests would be too tired in the evenings to do anything other than eat supper in one of the two restaurants (a buffet and an ‘a la carte’ offering) and get an early night.

But Club Med comes alive after dark. There are fully choreographed dance productions on the main stage, brilliant live bands, a flamenco band, and a nightly disco that goes on until midnight and beyond.

The highlight of each night, though, is Crazy Signs, when the dance floor is packed with guests of all ages dancing in unison. It really is something to behold. The sense of fun is palpable.

It’s how I imagine holidays would have been decades ago when people didn’t think they were too cool to make a fool of themselves and get stuck in. It’s not a relaxing holiday, but it is perfect family time, in sumptuous surroundings, that will make you discover your inner child again. The Sandersons loved it.

PROS: Entertainment from early morning to midnight and beyond, delicious food and good quality cocktails. Excellent kids club for babies through to teenagers.

CONS: So much entertainment it’s hard to relax. Music goes on until late and can be heard in the bedrooms. Thirty-minute walk to beach and Marbella town.